CANADIAN Class 1 freight railways Canadian National (CN) and Canadian Pacific (CP) both reported increases in revenue in their 2019 full year results while United States Class 1 Norfolk Southern (NS) reported a 1% decline compared with 2018 as it experienced a 5% drop in volumes. 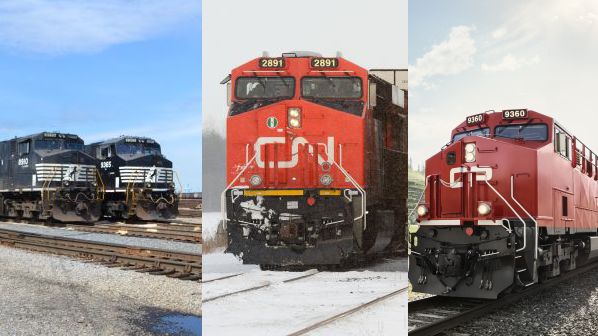 All three Class 1 railways are bullish about prospects for 2020 despite difficult economic conditions.

CN’s 2019 revenues rose by 4% to $C 14.92bn ($US 11.27bn), an increase the railway attributes predominately to freight rate increases, the inclusion of the TransX road haulage business in the intermodal commodity group, the positive impact of a weak Canadian dollar, and higher petroleum crude, natural gas and refined petroleum products in the first three quarters. These gains were partly offset by lower volumes of a broad range of forest products, reduced US thermal coal exports via the US Gulf Coast and a fall in frac sand volumes.

“We remain focused on executing our strategy of long-term sustainable growth at low incremental cost,” says Mr J J Ruest, CN’s president and CEO. “Our strategic deployment of technology, the next step in our Precision Scheduled Railroading model and our next driver of value, is well underway. At the same time, we continue to closely monitor the freight volume environment and right size our resources and costs to demand.”

CN invested $C 7.4bn in capital projects in the past two years to increase the capacity, efficiency and resilience of its network. However, Ruest says this will fall to $C 3bn in 2020, generating free cash flow of around $C 3-3.3bn up from $C 2bn in 2019. Ruest adds that he expects CN to report single digit growth in terms of revenue tonne-miles (RTM) in 2020 despite continuing weakness in the broad economic environment.

“CP’s strong operational performance and commitment to controlling costs enabled the railway to be successful despite headwinds to our bulk franchise,” says Mr Keith Creel, CP president and CEO.

Creel highlights the general slowdown in the global economy caused by geopolitical and macroeconomic challenges for an overall decline in North American rail volumes. However, he says by leveraging unique growth opportunities and applying its precision railroading operating model, CP led the industry in volume growth for the second year in a row and delivered on its guidance.

In 2020 the railway expects mid-single digit volume growth as measured in RTM and a capital expenditure of $C 1.6bn.

“As we head into 2020 and beyond, I’m confident we’ll continue to see wins in the marketplace enabling us to continue to outpace the economy and our peers,” Creel says.

In contrast, NS reported operating revenue of $US 11.3bn, which was 1% down, as overall volumes fell by 5% reflecting a decline in all major commodity categories. However, as NS embarks on a three-year strategic plan, which commenced in February 2019 and embraces PSR, the railway reduced its operating ratio to 64.7%, a record for a full year, helping to manage the headwinds of the fall in volumes.

Income from railway operations was $US 4bn, a 1% increase year-on-year, an all-time record. The railway’s operating expenses fell by $US 192m or 3% to $US 7.3bn. Lower compensation and benefits, fuel costs, equipment rental and material costs were partially offset by lower gains on operating property sales as well as increased purchase services and depreciation expenses.

“This was the result of extensive systemwide planning integrated with customer communications during the first half of the year that created a foundation for the flawless execution of the initial two phases of our PSR-based operating plan, TOP21, in the second half. The momentum we’re carrying into 2020 will support continued value creation.”

NS also announced on January 29 that it worked with 77 businesses which opened 54 new and 23 expanded facilities in 16 US states in 2019. The total investment was worth $US 1.9bn and is expected to create 1160 customer jobs as well as 62,300 additional wagonloads for NS annually.

Among the largest development projects were a fertiliser facility in Aurora, North Carolina; a butane export plant in Chesapeake, Virginia; a tissue manufacturing plant in Macon, Georgia; an asphalt facility in Chickasaw, Alabama; and an auto frame warehouse in Maumee, Ohio.