THE newly-appointed CEO of German Rail (DB), Dr Richard Lutz, announced a return to profitability on March 23 having turned a loss of €1.3bn in 2015 into a €700m profit last year. 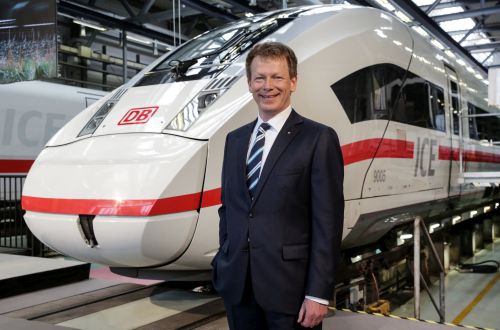 The improvement in performance was due primarily to an increase in long-distance passenger traffic which grew by 5.4% and passenger-km by almost 7% to 39.5 billion. DB Arriva boosted its passenger numbers by 5.9% to 1.76 billion in 2016, due in part to its successful bids for major franchises in Britain and the Netherlands. It also increased its market share in Britain from 14% to 23%.

However, tonne-km fell by 3.8% to 95 billion. This is partly explained by the fact that open-access freight operators increased their market share from 27.5% in 2015 to more than 30% in 2016, a new record. DB Cargo says it has put in place “a comprehensive blueprint for realignment and is currently working to return to a path of lasting success.”

“Our Future Rail programme is all about quality, and we are seeing the effects of our work to raise punctuality, improve cleanliness and offer our passengers better travel information,” Lutz says. “What is more, adjusted earnings before interest and taxes (Ebit) not only exceeded our target, but also rose more than 10% year on year. We also continued to generate growth at our international businesses. 2016 was a good year for DB.”