GERMAN Rail (DB) says it could end the year with a record operating loss of €3.5bn with sales dropping to €38.5bn, although it notes “all forecasts are still subject to high levels of uncertainty.” 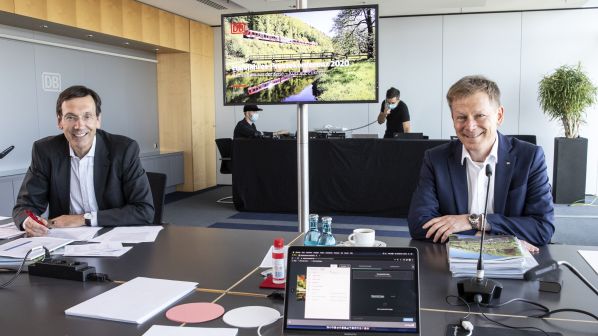 Announcing DB’s first-half results on July 30, CEO, Dr Richard Lutz, says the worldwide wave of infections from the coronavirus pandemic has hit DB hard economically and caused sales and earnings to plummet in the first half of 2020.

“Covid-19 has pushed DB, like many other large companies in Germany and around the world, into the worst financial crisis in its history,” Lutz says. “Such crises are not the kind of thing you can fix with a single project; they take time and hard work on the part of everyone involved. The road ahead will not be easy.”

“Our rail business is fixed-cost heavy, so when people stop travelling and revenues fall, that has an almost direct impact on our bottom line. Our group revenues fell roughly 12% to €19.4bn in the first half of 2020.

“At DB Regional, rail volume sold fell by almost 41% compared with the first half of 2019. At DB Cargo, the drop in volume sold was roughly 13%. DB Long-Distance saw a particularly marked contraction, with volume sold in April down by almost 90% compared with April 2019. Overall, the figure for the first six months was around 44% down on the previous year.”

“But we also have good news to report,” Holle continues. “Our May and June figures, and our initial figures for July, show some recovery. Half our passengers have now returned in both long-distance and regional transport.”

Holle says that while he is cautiously optimistic, “we have to be realistic: we will be facing this crisis for a while. We expect the serious impact of Covid-19 to continue into the coming year and beyond.”

Lutz says DB does not expect the federal government to cover all of its losses. “The government made two things clear very early on: that it would accept an increase in DB’s debt, and that it would provide an equity injection to supply the funds still needed after DB had done its part to close the gap,” Lutz explains.

“We agreed - and this is the government's expectation as well - that we would cover half the €8-10bn needed for rail in Germany ourselves,” Lutz continues. “This means that we at DB will be generating savings of at least €4bn between now and 2024.” Lutz says this will minimise the impact of DB’s Strong Rail investment strategy.