Network of European Railways and Mofair question the wider implication of the results and apparent preferential treatment shown to DB by the federal government. 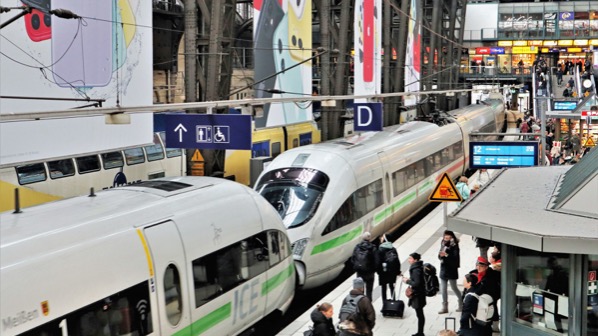 Although DB reports a loss of almost €1bn, it is encouraged by a return in passenger numbers.
Photo Credit: Deutsche Bahn.

GERMAN Rail (DB) has reported an operating loss of €975m for the first half of 2021. However, the railway reported a noticeable upturn in occupancy rates and bookings in the second quarter as coronavirus restrictions continued to ease in Germany.

This performance translates to a total loss of earnings after taxes of €1.4bn. However, sales were up 12.2% to €21.8bn in the first half of the year compared with the same period in 2020.

DB was also encouraged by the positive development of logistics subsidiary DB Schenker, which reported an operating profit of €630m, more than double the 2020 result, and the best first half figure in its history. International transport subsidiary Arriva reported sales of €1.93bn, which was down €128m year-on-year, and an overall loss of €31m.

According to DB’s chief financial officer, Dr Levin Holle, DB is aiming to offset half of the more than €10bn in losses caused by the crisis by 2024. “We are overcoming the severe consequences of the pandemic step by step. We want to continue the upward trend and in future be back in the black as a group,” Holle says.

DB is proceeding with a record investment in the railway in Germany with around €5.6bn gross and €2.7bn net investments in the first half of the year. Among the key investments in 2021 is the introduction of XXL ICEs, 13-car ICE 4 EMUs in June, the introduction of new ICE 4s at a rate of one every three weeks, and the renewal of 2000km of track. DB CEO Dr Richard Lutz reiterated the importance of these investments and support for the railway in general to counter the effects of climate change.

“The devastating floods made us aware once more of how serious the consequences of climate change are,” says Lutz. “That is why the rails are more important than ever for sustainable development. The upward trend of recent weeks confirms that people want to take the train again.”

Lutz added that it is his view that the pandemic will only temporarily delay the “renaissance of railways” and that the best is still to come.

As for the rest of 2021, DB is predicting an overall negative result, but at around €2bn it should be significantly lower than in 2020. DB assumes that sales will increase to €42bn but issues caution in this projection due to the uncertainty over the future course of the pandemic and recovery from the flooding.

The Network of European Railways (NEE), which represents private, regional and international freight operators, says that the €211m loss for DB Cargo emphasises the need for the German government to offer more support for the rail freight sector.

NEE says DB Cargo is set record its seventh consecutive annual triple digit million euro loss, and that the federal government must prevent such deficits by offering more support to rail. NEE urges the government to clarify how the company can increase productivity to return to profit post pandemic as it is doing for other industries. It says that DB Cargo’s performance of 43.01 billion tonne-km in the first half of 2021, only 1.5% down from the 43.74 billion reported in the first half of 2019, indicates that it was not as badly impacted by the pandemic as other subsidiaries.

NEE also points out that DB can cover such losses through the performance of DB Networks, which increased revenue by €206m or 7.5% in the first half, after it increased the cost of track access by 3.5% for rail freight at the start of the lockdown in December 2020.

“The extraordinarily large increase in DB Networks’ Ebit of almost 78% compared with the first half of 2020 raises additional questions,” NEE says. “For DB's competitors, it is still inexplicable as to why DB Networks was in the red in 2020 under commercial law. They want to see the suspicion of inadmissible cross-financing of loss-making transport areas in the group investigated.

“The extraordinarily negative 2020 annual financial statements of DB Cargo with - according to HGB accounting - a loss of €867m - should be questioned in this context by the EU Commission in the pending assessment of the controversial equity grants of the federal government.”

Mofair, which represents private rail operators in Germany, echoes NEE’s argument, stating that only the overall monopoly over rail infrastructure is shielding DB from an even bigger loss and the weaknesses of passenger traffic. “Without these network charges, not least paid by the competitor railways, the results of the integrated group would look even bleaker,” Mofair says.

The group also points out that DB’s debt ceiling, which was increased in 2020, is now almost exhausted as debt exceeds more than €32bn.

“The completely lost cost awareness of the integrated group must therefore be covered to an ever-greater extent by the taxpayers,” says Mofair president, Mr Tobias Heinemann. “For Mofair one thing is clear: new rail reform is needed more urgently than ever. Coronavirus must not always and everywhere be used as an excuse for the constant rise in debt.”

Much of the loss emanated by DB Long Distance, which ran largely empty trains throughout the duration of the pandemic, reportedly at the direction of federal politicians. Mofair argues that while maintaining a basic service is welcome, but it should have been done in a fair and transparent manner as it was in Austria where Austrian Federal Railways (ÖBB) and Westbahn were treated equitably by the Austrian government.

Mofair adds that the poor result reiterates the findings of the German Monopolies Commission's report earlier this month, in particular the need to adopt individual dividend payments for specific group companies rather than the group as a whole. It says this will offer more transparency on where this funding is going.

“DB’s half-year balance sheet shows one thing: we must not get used to the huge losses and the ever-increasing debt burden of the federally owned group,” Mofair says. “Instead, new rail reform is urgently needed. Discussions about this are by no means "from the day before yesterday" [as Lutz has said] but are hot and urgent.

“The merger of DB’s monopoly areas, their consistent focus on quality objectives and their transfer into direct federal ownership must be tackled immediately. In addition, the control agreements between DB Group and DB Networks must be terminated, as well as the profit and loss transfer agreements, which carry the risk that funds will be distributed from the infrastructure to the transport companies.”