Loan is for improving stations, reducing downtimes for maintenance and boosting non-fare revenue. 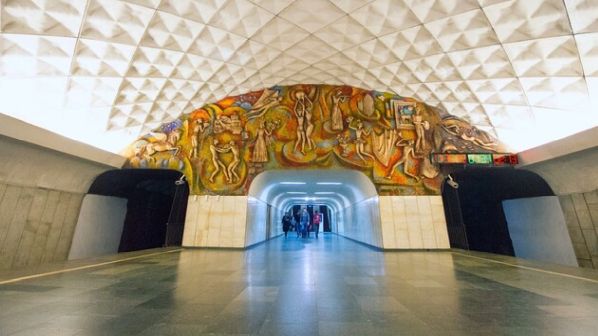 An eye-catching mural at one of the stations of the Tbilisi metro in Georgia.
Photo Credit: EBRD

THE European Bank for Reconstruction and Development (EBRD) has awarded Georgia a €50.6m loan to upgrade up to 12 metro stations in the country’s capital, Tbilisi, with the aim of encouraging a modal shift to public transport.

The metro network, which comprises two lines, a 19.6km north-south Line 1 and an east-west 7.7km Line 2, is operated by the Tbilisi Transport Company (TCC).

The financial package includes an investment grant of up to €5m from the Green Climate Fund (GCF), established by 194 governments to “limit or reduce greenhouse gas (GHG) emissions in developing countries, and to help vulnerable societies adapt to the unavoidable impacts of climate change.”

The €50.6m EBRD loan will help equip the city’s metro stations with better lighting and ventilation, plus more efficient escalators, while the drainage system will be overhauled to make the metro network more climate resilient. There will also be infrastructure improvements and a new asset management plan to reduce the length of time that the metro system needs to be out of action for essential maintenance, as well as boosting TTC’s non-fare revenues.

“By signing the Tbilisi Metro Modernisation Loan Agreement with the EBRD, we hope to further our efforts to improve Georgia’s environment and citizens’ quality of life,” says Georgia’s minister of finance, Mr Lasha Khutsishsvili. “We also hope that the project’s successful completion will encourage more people to use public transport by enhancing the metro system’s accessibility, dependability and safety. The project will improve the metro stations’ energy efficiency that will help the city to build more effective infrastructure and lead to enhanced climate resilience.”

The EBRD says it has so far invested €5bn in Georgia through 283 projects, including a €75m sovereign loan in 2019-20 for a tender launched by TCC for the procurement of 10 new four-car metro trains and modernisation of a depot and tunnel.