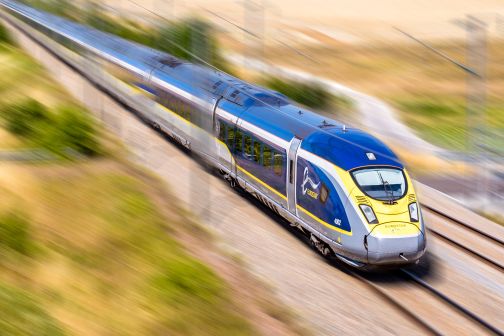 EUROSTAR chief executive, Mr Jacques Damas, has called for an airline tax to subsidise rail services to continental Europe, while suggesting that the business collapsing is a ”zero likelihood scenario”.

His comments were made in an interview with The Daily Telegraph newspaper, which was published while travellers from France must still quarantine for 10 days when arriving in Britain.

Damas says British prime minister, Mr Boris Johnson, should urge passengers to use Eurostar rather than fly to northern Europe. “If you do not want to ban, but give an incentive, it is very easy,” Damas told The Telegraph. “If you just work with the taxation system. If you take just £1. Take £1 more in taxing fuel for aircraft, and take that £1 as a reduction in access charges on the railway.”.

The cross-Channel operator’s business has been decimated by the pandemic. Spokesman Mr Rob Haycocks told IRJ that currently there are three trains running daily between London and Paris, and one on the Brussels/Amsterdam route. No other routes are currently operating, and St Pancras International will remain the only British station served by the operator until 2022.

“We will continue to review demand and update the timetable in response,” Haycocks says. “As we restart services, the focus will be on our most popular routes between capital cities so there is not an update in terms of those routes we are not running at the moment.”.

There have been calls for the British government to provide financial assistance for Eurostar, which at the height of the pandemic had lost 99% of its business due to travel restrictions. However, secretary of state for transport, Mr Grant Shapps, said on February 5 at a Transport Select Committee that the operator was “not a UK problem to solve” because its largest majority shareholder is French National Railways (SNCF).

A £250m rescue package was secured from shareholders in May, but this needs to be repaid by next March, The Telegraph suggests. Damas said the company’s debt is approaching €1bn.