Eurostar sales and passengers up in 2014

SALES at Eurostar increased by 1% in 2014 to £867m following a 3% increase in passengers to 10.4 million on its services from Britain to continental Europe. 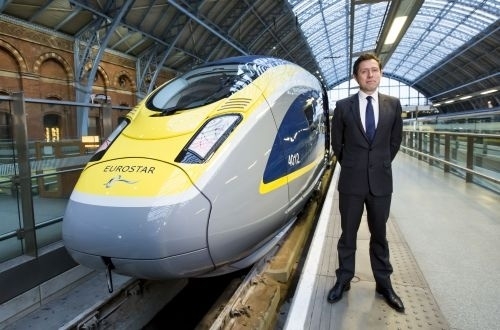 Eurostar cites improvements in the British economy for its enhanced performance which translated to a 3% increase in business class bookings throughout the year compared with 2013. Profits also increased by 2% year-on-year to £55m from £54m in 2013. This operating profit reflects additional non-cash charges against the value of the existing fleet with Eurostar announcing that it would purchase an additional eight e320 trains from Siemens in November to meet growing demand and to serve additional destinations. Among the new services is a direct London - Lyon - Avignon - Marseille train which is due to launch on May 1 and Eurostar says that early ticket sales have been encouraging.

Eurostar is investing over £1bn in its services and plans to introduce 17 new trains over the next three years, with the first e320s set to enter service by the end of the year. Carrying 900 passengers, the 320km/h trains will offer 20% extra capacity over its existing fleet.

"2014 was a pivotal year for our business as we celebrated our 20th anniversary and unveiled our new fleet," says Mr Nicolas Petrovic, Eurostar's chief executive. "Our new e320 trains are now in the final months of testing and on schedule to come into commercial service at the end of this year. As we introduce new trains, upgrade our stations and invest in our service, passengers can look forward to a complete transformation of their travel experience."