BRITAIN's National Audit Office (NAO) says the government's decision to sell its 40% stake and preference share in cross-Channel high-speed operator Eurostar in March was primarily driven by its desire to complete the sale before national elections in May rather than wait for a forecast increase in the share price in 2016. 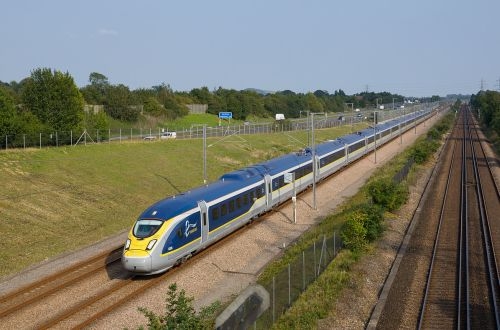 One of the new Siemens Velaro trains for Eurostar under test.

The NAO concludes that the total proceeds from the sale of £757.1m "resulted in the government achieving its objective of maximising proceeds, and represented value for money for the taxpayer." But the NAO says Eurostar's profits are expected to increase next year with the introduction of its new fleet of higher-capacity Siemens trains, the first of which is due to enter service before the end of the year. Eurostar also plans to launch a London – Amsterdam service in early 2017, which should boost profits further.

The NAO estimates that British taxpayers have invested about £3bn in the provision of the Eurostar train service from London, to Paris and Brussels. This includes the trains, stations and depots. Some of the original investments in North of London trains, and an overnight fleet subsequently sold to Via Rail Canada, were follies, while the international platforms and facilities at London Waterloo and North Pole depot have remained unused until recently following the switch of services to London St Pancras in November 2007. The international facilities for Eurostar at Stratford International in East London have never been used.

"The short term gain was at the cost of long-term benefits for the taxpayer," says Ms Meg Hillier MP, chair of the British parliament's Committee of Public Accounts. "Once sold, the family silver can't be bought back. Had it kept its share, the government was forecast to pay off over £500m of national debt over the next 10 years using dividends from its 40% share in Eurostar, and receive a further £243m in dividends from its preference share."