VTA can apply for up to 50% of the cost of 9.7km line including an 8km tunnel under San Jose. 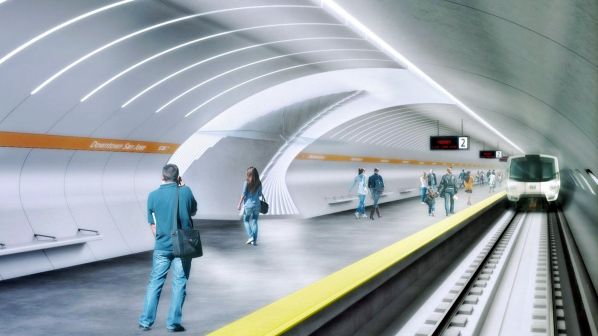 An artist's impression of how the Bart Downtown San Jose station will look when completed.
Photo Credit: Bart

THE Santa Clara Valley Transportation Authority (VTA) has received authority to pursue federal funding to cover up to 50% of the cost of Phase II of the Bay Area Rapid Transit (Bart) Silicon Valley Extension Project (BSVII).

BSVII is aiming to extend the 16km Phase I Warm Springs/South Fremont - Milpitas - Berryessa/North San José line by 9.7km and four stations to central San José and into Santa Clara. The VTA says that up to $US 4.6bn of funding for the project could be received from the federal government.

Approval by the Federal Transit Administration (FTA) for BSVII to re-enter the federal Capital Investment Grants New Starts Funding programme allows VTA to apply for twice the amount of funding anticipated under the previous Expedited Project Delivery pilot programme. It also means eligible expenses dating back as far as March 2016, as well as costs for remaining work due to be carried out, can receive potential grant reimbursement up to the potential project cost of $US 9.3bn.

In view of the FTA’s decision, VTA’s board of directors has authorised contract amendments for up to $US 460m including purchase of a tunnel boring machine and other early construction costs.

The tunnel and trackwork contract has been awarded to Kiewit Shea Taylor, a joint venture between Kiewit Infrastructure West, JF Shea Construction and Traylor Brothers, supported by Kiewit Engineering Group and Arup, which was among three joint ventures shortlisted for this part of the project in May 2021.

Kiewit Shea Taylor plans to procure a tunnel boring machine of approximately 16.5m diameter to enable it to excavate the 8km tunnel under central San José required as a major part of BSVII. As well as being the largest public infrastructure project to be constructed in California’s Santa Clara County, the 14.6m-diameter tunnel will be the first in the United States to be constructed as a single bore wide enough to accommodate both tracks and station platforms.