CONTINUING disruption to train services in Germany caused by flood damage to tracks near the River Elbe, exacerbated by staff shortages at a signalling centre in Mainz, a major junction on the network near Frankfurt, are likely to cost German Rail (DB) dear as a result of lost revenue and increased operating costs. 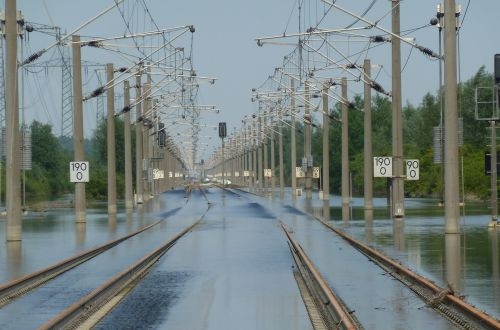 The Hannover – Berlin high-speed line has been severed near Stendal for around two months due to flood damage and is expected to remain so until December. DB hopes to have a better idea next month of when the line can reopen. In the meantime, ICE and Intercity services from Berlin via Hannover and Brauschweig to destinations in western and southern Germany are being diverted via Magdeburg with journey times extended by one hour, with many services cancelled. About 25% of all DB's long-distance passenger services are affected. This is putting a strain on staff and rolling stock resources, compounded by the late delivery of new ICEs from Siemens.

The flood damage itself is forecast to cost around €500m to repair which the federal government is expected to pay for from its disaster relief fund. However, DB will have to bear the brunt of the revenue shortfall, which according to the Frankfurter Allgemeine is estimated at between €80m and €100m by the end of the year, and DB has yet to factor in the cost of the disruption in the Mainz area.

During the first half of 2013, DB carried an additional 10 million passengers increasing the total to 991 million. While first-half revenue remained stable at €19.37bn, earnings before interest and taxes (Ebit) fell by 22.9% to €1bn. DB is now likely to see a drop in traffic and revenue during the second half putting its finances under further strain.