The Industrial Plan will see a vast restructuring of the state-owned railway’s various subsidiaries. 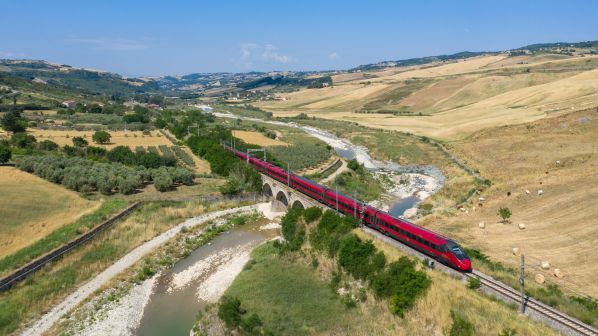 ITALIAN State Railways Group (FS) has released the details of the 2022-2031 Industrial Plan, its long-term strategic and industrial vision that will be implemented through more than €190bn of investment over the next 10 years. The plan, which envisages a profound redefinition of the group’s governance and a new organisational structure, was presented in Rome by FS chairwoman, Ms Nicoletta Giadrossi, and CEO, Mr Luigi Ferraris.

FS currently operates more than 10,000 trains a day, carrying 1 billion train and bus passengers and 45 million tonnes of freight per year. The rail network managed by its subsidiary infrastructure manager RFI extends to 16,800km, including around 700km of high-speed lines. The group also operates a 32,000km network of motorways and major roads, managed by Anas.

The 10-year plan aims to ensure that:

Internationally, FS wants to generate further value in the countries where it is already present including France, Spain, Germany, Greece, the Netherlands and Britain. Outside Europe, FS also plans to export integrated know-how through partnerships.

FS’ revenues are expected to increase to around €22.5bn in 2031 while Ebitda will increase to €3.9bn, with an average annual growth rate over the period of 6.9% and 8.2%, respectively.

“The goal of the 2022-2031 Industrial Plan is to accelerate investments and provide more certainty that works will be completed on schedule thanks to a long-term vision,” Ferraris says. “We are working to make our infrastructure more modern, interconnected and resilient, and tailor our mobility services to the different needs of our customers. We intend to promote multimodal, public transport that is more sustainable even in urban areas, double the share of freight transported by rail, and contribute to ecological transition not only by making the use of rail more attractive, but also by at least 40% of our substantial energy needs from our own renewable sources. The plan envisages the recruitment of 40,000 staff over 10 years and sees people as its main enabler, along with innovation, digital transformation and connectivity.”

The company’s subsidiaries will be restructured into four business hubs, each with clear strategic objectives: Infrastructure, Passengers, Logistics, and Urban. FS says the new organisational structure will boost the potential of the various subsidiaries and their cross-synergies. The four new hubs will all share the same mission and objectives, and are expected to play a crucial role in developing an increasingly integrated and sustainable infrastructure and transport system for the benefit of the country:

The Infrastructure Hub will include integrated and resilient physical infrastructure, together with engineering services. The hub will be led by Italian Rail Network (RFI), and includes, Anas, Italferr and Ferrovie del Sud-Est.

The inclusion of RFI and Anas in the same hub is intended to maximise industrial synergies, ensuring full integration of rail and road infrastructure. Together the two companies manage around 50,000km of arterial roads and railway lines, nearly 4000 tunnels and more than 40,000 bridges, underpasses and viaducts.

Anas will invest around €50bn in network development, unplanned maintenance and other initiatives required to complete the plan. The inclusion of the company in the Infrastructure Hub will also drive the acceleration of the digitisation and connectivity of roads, transforming them into smart roads.

The Passengers Hub will unite FS’ rail and road passenger operating companies to promote integrated transport solutions, increase the market share of public and shared transport and propose services that are increasingly customised and attentive to the needs of individual passengers. The hub will invest around €15bn by 2031.

The sector will be led by Trenitalia, and includes local bus operator Busitalia, Ferrovie del Sud Est and its rail and road network in Salento, and Trenitalia Tper, a 70% subsidiary of Trenitalia which manages regional rail services in Emilia-Romagna.

The Passengers Hub will also support the development of tourist services, including services connecting railway stations, airports and sea ports. These will be complemented by an increase in slow tourism on historic trains travelling on lines that are still in operation or no longer used for commercial traffic, allowing passengers to explore Italy’s cultural, scenic and culinary delights on trains that have played a key role in the country’s rich history

Intermodality between FS’ transport modes is the core business of the hub and synergy between Trenitalia, Busitalia and Ferrovie del Sud Est will make it possible for passengers to devise itineraries using multiple modes of transport.

FS says the creation of the Passengers Hub will ensure a competitive advantage when participating in public tenders for local and suburban public transport as the hub will be able to offer widespread connections adapted to the needs of the local region through a single provider.

The hub will be structured into:

The Logistics hub will be tasked with doubling rail’s share of freight traffic compared with 2019, as well as improving existing and creating new freight terminals. The sector will be led by Mercitalia Logistics, and includes seven national and international operating companies, including Mercitalia Rail, Tx Logistik and Mercitalia Intermodal.

Rail freight currently has an 11% market share in Italy, below the European average of 19-20%, and well beneath the figure for Switzerland and Austria (around 35%) and the United States (46%). Doubling this will be achieved through a series of system-wide measures requiring almost €2.5bn of investment. The construction of new, technologically advanced and environmentally friendly intermodal rail freight terminals will increase freight volumes, especially for intermodal transport.

Around 3400 vehicles will be replaced, and a further 3600 new-generation, environmentally-friendly electric and hybrid vehicles introduced.

The Urban Hub will repurpose surplus property and increase the attractiveness of stations to sustainably regenerate the cities they are located in. The sector will be led by Sistemi Urbani, and includes Metropark, RFI, Anas, and Gs Immobiliare. The hub’s main strategic priority will be to manage and regenerate the group’s property assets, with €1.5bn of investment concentrated on around 24 million m2 of land alongside roads and railways, which could be used to produce clean energy, plant trees, and create green corridors and cycle paths.

Stations will also be transformed into service centres and interchanges between rail and other modes. Digital connections with stations in small towns losing inhabitants will be improved, to attract people back to the regions.

The hub will also manage FS’ car parks, which will increase from 84 to 250, adding 20,000 more parking spaces, thousands of electric charging columns and new spaces for car sharing.

FS says the implementation of the plan will be dependent on the proper management and development of its 82,000 existing staff, along with the recruitment of 40,000 new staff over the course of the period. This will be achieved through rewarding talent, supporting inclusiveness, ensuring safety at work, fostering professional development and identifying and preparing future company leaders.

FS currently accounts for 2% of the national energy demand, and the group aims to install renewable energy technology to meet at least 40% of its own needs. This will increase internal efficiency and contribute to national ecological transition objectives, including reducing CO2 emissions by 7.5 million tonnes per year through modal shift.

FS’ international initiatives are also increasingly central to the plan as it intends to position itself as a “multidomestic company” in Europe, which it says is now becoming a domestic market thanks to increasing liberalisation and the push towards public transport. The development of an international strategy for all group companies is expected to result in an increase in revenue from €1.8bn in 2019 to around €5bn in 2031.