THE United States Federal Transit Administration (FTA) has announced $US 400m in federal funding for four transport projects in the states of New Jersey, Missouri, Arizona and Indiana as part of its Capital Investment Grant (CIG) programme. 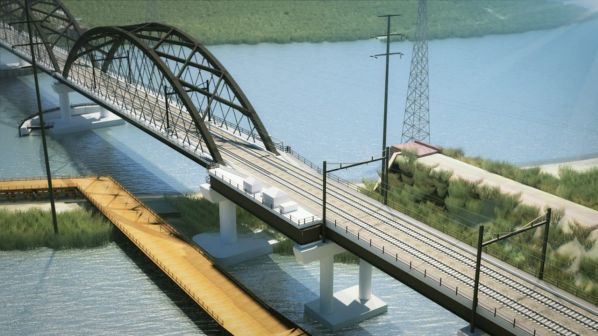 Artist's impression of the new Portal North Bridge on the Northeast Corridor.

New Jersey’s $US 1.8bn Portal North Bridge project will receive an additional $US 248m in CIG grants to cover expenses incurred during the 2018 and 2019 financial years.

The project will construct a two-track fixed bridge across the Hackensack river on the Northeast Corridor route between New York and Newark, which currently serves around 300,000 passengers per weekday on Amtrak and NJ Transit (NJT) services.

The bridge will include a 366m central span between Kearny and Secaucus, as well as long approaches with a total length of 3.53km on either side. It will replace the current double-track swing-bridge, which is over 100 years old and represents a significant bottleneck for both rail and river traffic. The project is a joint undertaking between NJT and Amtrak.

The grant follows the approval of $US 767m in funding by the FTA for the project on July 1, and an additional $US 55m provided by the FTA to Amtrak on May 26.

The project is a 5.6km extension to the Kansas City Downtown Streetcar light rail line, which will run south from the existing terminus at Union Station to the University of Missouri’s Kansas City campus.

Construction is expected to begin in late 2021, and the line is scheduled to open in 2023.

Local government is expected to fund 52.1% of the project, with the remaining 47.9% as federal funding. The FTA approved the project for entry into the engineering stage of the CIG programme in May, following an application by the project managers for a full grant of $US 174m.

In addition, both the Double Track Northwest Indiana (DTWI) project in Gary, Indiana, and the Northwest Extension Phase II project Phoenix, Arizona, will each receive CIG grants worth $US 50.6m to cover the 2020 financial year.

The Northwest Extension Phase II is a 2.6km $US 401.3m extension to Phoenix’s Valley Metro Rail (VMR) light rail network. Construction began in August and is expected to be completed in 2023.

The new line will extend services from the present terminus at 19th Avenue to the Metrocenter Mall, and is an expansion of the 45km light rail network linking Phoenix, Tempe and Mesa. It follows the 2km Phase I Northwest extension which opened in March 2016, which extended light rail north on 19th Avenue from Montebello to Dunlap Avenue.

The project is part of Transportation 2050, a 35-year, multimodal transport strategy to develop the city’s public transport systems and increase capacity for a growing population.

The DTWI project is a 42.8km $US 420.3m track-doubling project on the Northern Indiana Commuter Transportation District (NICTD) South Shore commuter line between Gary and Michigan City. The project is part of NICTD’s 20-year strategic plan of infrastructure upgrades to the rail network which is intended to increase the capacity, speed and frequency of rail traffic in the state.

Under the CIG programme, the projects can be granted funds in advance of readiness to receive a Full Funding Grant Agreement (FFGA). However, the grants can only be awarded to the projects once they meet requirements outlined in the programme framework.