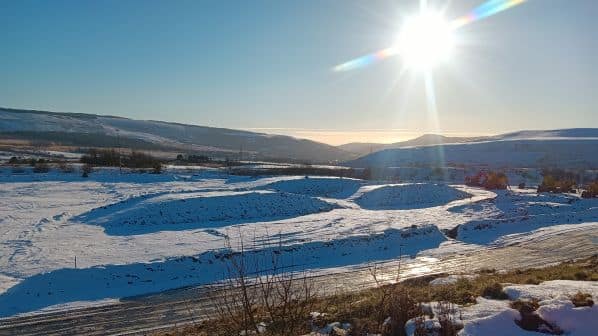 Trial mounds for earthworks seen during a visit to the GCRE site on January 20.

GLOBAL Centre of Rail Excellence (GCRE) has formally launched its search for a private-sector funding partner that would take a controlling stake in the project to build a testing and innovation centre in South Wales.

GCRE has published an OJEU contract notice inviting applicants to prequalify by February 28. Selected prequalified bidders will then be invited to participate on April 3, when they will be provided with information on the project’s financial model, revenue and client base.

The aim is to then sign a contract in September or October of this year.

The project has received £70m from the Welsh and British governments which is funding Phase 1 of the project. This first phase includes ground works, site preparation, outline design and the development of rolling stock storage facilities.

The contract notice says that capital deployment will need to take place over a three-year period with the aim of achieving full commercial operation in the 2025-26 financial year.

Beyond the initial public and private investment of £400m, GCRE says there is also an opportunity to commercially develop renewable energy opportunities at the site in line with its strategy of being Britain’s first net-zero railway, meeting all its energy requirements from sustainable resources.

According to chief commercial officer, Ms Kelly Warburton, GCRE has chosen this method of finding its funding partner as the established EU procedures provide “a really good structured methodology of procurement.”

GCRE chief executive, Mr Simon Jones, says that it should also help to avoid any potential conflict of interest or allegations that state aid is being misused to unfairly benefit a private-sector company.

Public funding for Phase 1 is being used to undertake the major programme of earthworks that are needed to build the testing centre on the 700ha GCRE site formerly occupied by the Nant Helen open cast coal mine near Neath in South Wales.

The site is at present far from level. It is dominated by heaps of waste material as high as 320m. Backfill formerly used to fill mine workings will be used to build the earthworks required for the two testing loops, including one embankment on the main testing loop that will be 1.5km long and 35m high at its most elevated point.

A total of 3.5 million m3 of material will need to be moved, with work due to start in March once weather conditions improve and expected to be in full swing by this summer

The GCRE project is the subject of a feature article in the in the January issue of IRJ, p36.