Agreement between federal government and DB increases funding by €1bn. 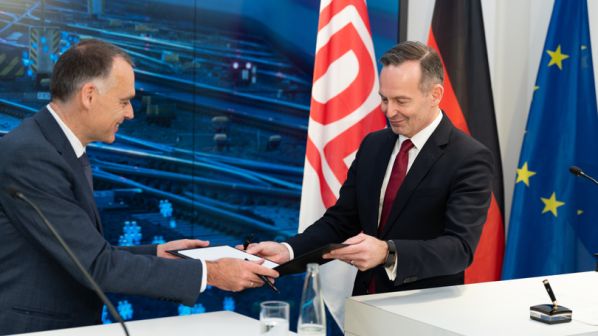 THE German Federal Ministry for Digital Affairs and Transport (BMDV) and German Rail (DB) have signed an agreement increasing the funding for a programme to install ETCS across the German network from around €1.7bn to around €2.7bn.

“With the agreements concluded today, we are creating the financial basis for introducing the ETCS train control system and at the same time modernising and digitising the interlocking landscape in Germany,” Wissing says. “This immediately ensures more capacity in the existing system and thus quickly more rail services.”

DB has received approval to further finance planning of several projects in its “starter package” in the Digital Rail for Germany programme, which aims to install ETCS and digital interlockings on four routes by 2030.

DB is prioritising the rollout of ETCS on the Rhine-Alpine freight corridor, the principal route from the Dutch North Sea ports to Italy, although neither the ministry or DB state how much of the funding will support this project or what elements are the priority.

However, they do confirm that €307m will be allocated to support further planning for the rollout of ETCS on the Scandinavia-Mediterranean corridor, which runs between Denmark and Austria. DB is aiming to fully equip around 4500km of track with ETCS by 2030.

A further €83m will be allocated to support planning of the third phase of the Digital Node Stuttgart project, which will cover more than 300km of lines and is scheduled for activation after 2030. Work is underway on the first two phases, which aims to install ETCS on 125km of lines comprising new infrastructure required for the Stuttgart 21 project and the central portion of the city's S-Bahn network. This work will be completed in 2025 in line with the opening of Stuttgart 21.

Another €11m is supporting planning of the rollout of ETCS on the Cologne - Frankfurt high-speed line. DB is aiming to equip 200km of line with ETCS and digital interlockings by 2028.

The Digital Rail for Germany programme aims to renew signalling technology, some of which dates back to the 19th century, across the German network, and the goal is to complete the work within the next 20 years.