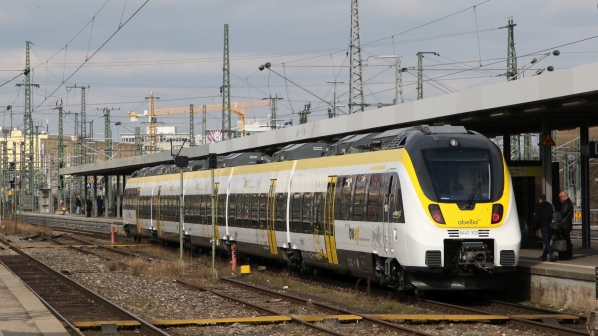 Netherlands Railways (NS) subsidairy Abellio may be forced into insolvency and cease operation in Germany by December due to continuing losses.
Photo Credit: Keith Fender

As Germany’s concession system largely pays regional passenger operators per km operated, the partial lockdown in Germany between early March and July resulted in a reduction in the distance operated, causing a drop in revenue. The number of services operated was also reduced by staff shortages and requests from local authorities.

German business newspaper Handelsblatt reports that Abellio, a subsidiary of Netherlands Railways (NS), may be forced into insolvency and cease operation in Germany by December due to continuing losses which in turn is making cash demands on NS, which itself is reliant on additional government funding.

As well as suffering considerable delays in the delivery of new trains from Bombardier for contracts around Stuttgart, Abellio has also had significant issues mobilising new contracts in the Ruhr region this year due to a shortage of train drivers. The national shortage of qualified train drivers has led to an increase in wages at a rate faster than the national average. Rail trade unions have successfully negotiating pay increases with several operators, resulting in much higher than expected wage costs for some operators. Combined with the decrease in revenue, these higher costs have resulted in a toxic mix which may impact the viability of some private passenger operators.

Germany’s regional governments are drawing up plans to cover some of the additional Covid-19-related costs, which include running longer trains to increase capacity and improving cleaning, as well as some lost revenue. However, several are not planning to cover all operators’ losses with Saxony proposing to cover only 70% and Bavaria proposing to cover no more than 90%. Given the low profit margins for most contracts pre-pandemic this support is likely to be insufficient and lead to concession operators entering insolvency.

A new entrant to the German market, British based GoAhead group, has announced it is pausing future contract bidding in Germany “...while the board considers its strategic options.”

GoAhead’s German subsidiary has struggled with the introduction of new contracts in Baden Württemberg over the last year due to a shortage of trained drivers and delays in the introduction of the fleet of Stadler Flirt EMUs ordered for the contract. The operator was forced to use subcontractors for several months on some routes. GoAhead has recently changed its senior management in Germany after booking losses of around £30m on its German contracts in its 2020 financial results, and is pursuing a claim for up to £26m in compensation from Stadler for late delivery of the Flirt fleet.

GoAhead has won two major contracts in Bavaria, which are due to start in the next two years.