THE German federal government and German Rail (DB) have agreed the new €86bn LuFV III rail infrastructure programme for 2020-2029, which represents a 54% increase over the previous LuFV II plan. 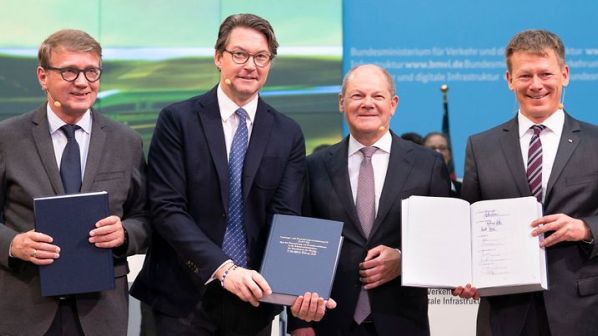 The federal government will contribute €62bn to the plan while DB will fund the remaining €24bn. This means DB will be able spend an average of €8.6bn per year on maintaining and modernising the national rail network compared with €5.6bn annually in the previous LuFV II programme. This represents a 44% increase in spending for DB. In addition, the government says the dividend payments from DB infrastructure companies will be fully reinvested.

LuFV regulates the replacement of assets on the existing rail network, determines quality indicators and applies sanctions for non-compliance. The Federal Railway Authority (EBA) monitors the implementation of LuFV, and 17 criteria were agreed to measure the success of LuFV III. Quality indicators document the status of the network, such as how many bridges have been renewed and how much is spent on maintenance.

Under LuFV III, DB will renew around 2000km of track and 2000 switches each year. In addition, 2000 railway bridges will be renovated this decade and about €7bn will be spent on renewing interlockings.

The 10-year programme should provide more planning security for DB and allow long-term agreements to be made with suppliers. The government hopes this will act as an incentive to increase capacity and innovation in the railway construction industry.

“The wow effect is coming,” Scheuer says. “The 2020s will be a brilliant era for rail. We are signing the largest modernisation programme ever in Germany. Our goal is a high-quality network as the basis for active climate protection in transport.”

“The infrastructure is the basis not only for growth and modal shift, but also for good operational quality and high punctuality,” Lutz says. “With the new service and financing agreement, we can tackle the investment backlog and fundamentally modernise the infrastructure. This will make the rail network more robust and reliable, and stations will become more attractive.”

Profalla describes LuFV III as the start of a “modernisation offensive on the German rail network that has never existed on this scale.”

However, not everyone is happy with the new LuFV III agreement. “An open and cross-party debate as to how the rail system in Germany is to be set up in the future is long overdue, especially given the great hopes that are being placed on rail in climate protection policy,” says Mr Christian Schreyer, president of Mofair, the alliance for fairer competition in German passenger rail transport. “However, this discussion must not be a soliloquy between the federal government and DB.”

Schreyer wants DB’s competitors who are also customers of infrastructure manager DB Network to be involved as well. Schreyer also says the idea of a recently-proposed single rail summit will be insufficient to make informed decisions.

The Berlin-based European Rail Freight Network Association (NEE) describes LuFV III as a “step in the right direction” but does not think the level of funding is sufficient to “remedy the renovation backlog following decades of infrastructure neglect.” NEE also points to continually rising construction costs.

“The glass is half full, but much too small,” says NEE’s managing director, Mr Peter Westenberger. “Only with an efficient existing network as a basis can we even think of achieving the growth target of 25% market share for rail freight,” he says.

Westenberger is also unhappy about the funding arrangements for LuFV III. He says almost €4bn of the federal government’s contribution will be diverted from the budget for new construction and expansion. “Rail transport companies are expected to contribute €23bn directly via infrastructure charges,” he points out. NEE says €8bn of DB’s contribution will be generated through profits from the infrastructure companies. “The federal highway company does not have to make a profit,” Westenberger says, pointing to the unequal treatment of rail compared with road transport.

NEE says LuFV III should not be considered as being “set in stone” and is calling for the deal to be renegotiated to take account of increasing demand and to waiver the profit orientation for rail infrastructure.