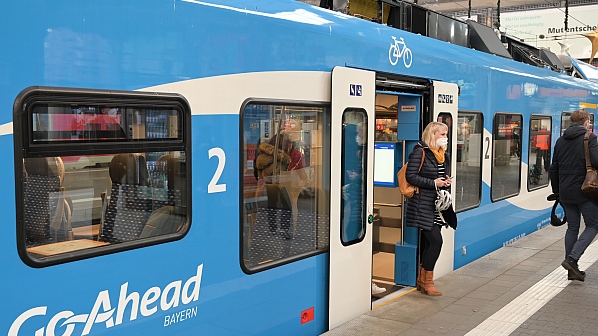 GO-AHEAD Transport Germany has commenced operating its first services on newly-electrified routes in Bavaria from Munich via Memmingen and Lindau.

The first train departed Munich main station at 00.20 on December 12, operating to Buchloe. British company Go-Ahead has a 12-year contract that will involve 2.7 million train km per year.

Initially the service will use 22 four-car Stadler EMUs, maintained by TMH Germany. The air-conditioned trains have a seated capacity of 216 and space for at least 20 bicycles per train. Go-Ahead says it has recruited 61 drivers and 43 conductors for the new service.

A revamped timetable has been introduced with journey times on the 112.6km Munich - Memmingen route taking just over an hour. Many stations have been upgraded to enable step-free boarding and improved access for wheelchair users and people with pushchairs.

The contract was awarded by Bavarian Railway Company (BEG) and Baden-Württemberg Ministry of Transport. BEG originally planned for the new contract to coincide with the launch of electric services, but there were delays in the tendering procedure. The railway was electrified last year, with DB Regio operating passenger trains until Go-Ahead took over.

Go-Ahead operations in Bavaria will expand further in December 2022 when the company takes over regional services on the high frequency Munich - Augsburg - Ulm, Augsburg - Donauwörth and Donauwörth - Aalen lines. These will use a fleet of Siemens Mireo and Desiro HC EMUs currently on order.