Review by Britain’s Competition and Markets Authority has pushed back completion from March-April 2023. 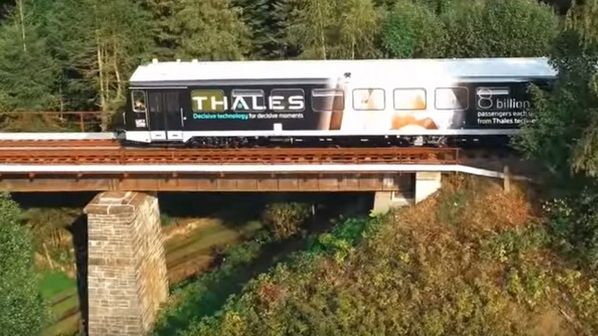 COMPLETION of Hitachi Rail’s acquisition of Thales’ Ground Transportation Systems business is now not expected until the second half of 2023, the two companies announced on December 9.

The deal, which was confirmed in August 2021, was expected to be signed off in March or April 2023. However, Britain’s Competition and Markets Authority (CMA) has stated its intention to open a Phase II review of the transaction, which is expected to take six to eight months, pushing back the anticipated completion date of the £1.66bn deal.

The procedure was prompted by an Office of Rail and Road (ORR) study which found that that the supply of mainline signalling in Britain suffered from a lack of competition, with the market essentially limited to two suppliers - Siemens and Alstom. ORR’s report made a number of recommendations to increase competition from alternative suppliers, including Hitachi and Thales.

Infrastructure manager, Network Rail, is introducing a new tendering process for the Train Control Systems Framework, its next major signalling procurement, which will focus on procuring ETCS, and will implement ORR’s recommendations. CMA says it is concerned that the deal between Hitachi and Thales could “eliminate a credible competitor from the new tendering process.”

Thales is the leading supplier in the British urban signalling market and CMA says that while having a smaller presence, Hitachi is one of a limited number of rivals with the capability to challenge Thales.

“The resulting loss of competition across both mainline and urban signalling markets could increase costs for Network Rail and TfL and have an adverse knock-on effect on taxpayers and passengers,” CMA says.

CMA adds that Hitachi now has the chance to submit proposals to resolve the CMA’s concerns. A Hitachi spokesman told IRJ that the company welcomed the opportunity.

“Network Rail currently spends close to £1bn annually on mainline rail signalling - and this is expected to increase in future, as equipment needs to be replaced and the UK transitions to digital signalling,” says Mr Colin Raferty, senior mergers director at the CMA. “The cost of signalling, and its critical role in the safe and efficient running of our railways, makes it important that we ensure that future tenders can deliver value for money.”

The two companies say they have secured more than two-thirds of the regulatory approvals necessary for the transaction to proceed, including receiving clearance in nine of the 13 required jurisdictions. Hitachi Rail is currently in pre-notification discussions with the European Commission’s Directorate-General for Competition (DG-Competition) with a view to re-entering the submission phase.

A Hitachi spokesman told IRJ said that no issue is anticipated here and it is the CMA procedure that is causing the delay to completing the transaction.

“Hitachi Rail and Thales strongly believe in the competitive benefits of the transaction, which will deliver value for customers in the rail signalling and mobility sectors in Britain, Europe and globally,” Hitachi Rail said in a statement. “Despite being disappointed by the impact of the CMA's decision on the timeline, Hitachi Rail remains committed to working with Thales and all regulatory bodies to ensure the successful close of the transaction as soon as possible.”

The acquisition will further reinforce Hitachi’s position in the urban and mainline signalling, train control, telecommunications and supervision, and fare collection markets following its acquisition of Ansaldo STS in January 2019.

Speaking to IRJ at InnoTrans in September, Hitachi Rail CEO, Mr Andrew Barr, described the deal as a “real game-changer” for the supplier. Barr said the Thales acquisition is a key component of Hitachi’s strategy to provide a digitally-based offer to the market where hardware is supplemented by digital technologies, ticketing systems and multi-modal journey planning.