The projects including constructing a third track on the Ferencváros - Kelenföld section in Budapest. 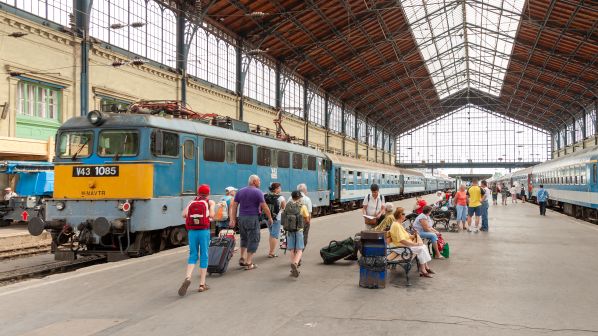 Budapest-Nyugati could be transformed into an underground station as part of plans for a rail tunnel in the city.
Photo Credit: Shutterstock/Alex Segre

HUNGARY has requested funding for 17 projects under the second phase of the European Union’s €20.73bn Connecting Europe Facility (CEF2), including €240.5m for various rail projects.

The majority of the rail funding will be used to build a 5km third track between Ferencváros and Kelenföld in Budapest to facilitate commuter traffic. Two bridges along the route have already been replaced to accommodate the additional track, with more bridges and an embankment still requiring widening.

A fly-over will also be built at Ferencváros to segregate passenger and freight trains, and the passenger station at Ferencváros will be moved east to improve access to metro Line 3. New stops will be added along the line to allow the introduction of S-Bahn style passenger services.

The project is part of the so-called Southern Belt project which forms a strategic element of the Budapest Suburban Railway Node Strategy (BAVS), which aims to improve rail services through central Budapest.

The funding will also be used to upgrade the Hegyeshalom - Szombathely - Zalaszentiván sections of the Amber freight corridor in western Hungary to TEN-T specifications. The lines are operated by GYSEV and will connect with the Szombathely - Szentgotthárd line, which continues towards Graz, Austria, and the Budapest - Hodos, Slovenia, rail freight corridor towards Italy. The line then continues as a MÁV line from Zalaszentiván to Murakeresztúr and Gyékényes, which both provide connections into Croatia.

This work will contribute to future projects to remove the largest bottleneck on the line, the 40km unelectrified Zalaszentiván - Nagykanizsa section, which restricts the flow of trains from Slovakia, Poland and the Baltic states towards the Adriatic sea, forcing some to take the longer route via Austria.

Also included in the funding request is the planning works for phase 1 of the 4km Budapest rail tunnel, which will run from Déli to Nyugati with a new underground stop at Széll Kálmán tér, near Déli. The tunnel will transform Budapest-Nyugati into an underground station, making it Budapest's central station, and will also transform the terminal stations at Déli and Nyugati into through stations, doubling the number of trains entering the city and creating new through services. A detailed feasibility study is currently being prepared, although a formal decision on whether to approve the project is yet to be made.

However, Nyugati station and the lines approaching it are currently being rebuilt, with 12 international design studios taking part in the second phase of the tendering process for the project. The CEF2 project will likely finance this planning work, or the subsequent detailed construction planning, which will need to conform with the proposed tunnel project.

For detailed data on rail projects from Hungary and around the world, subscribe to IRJ Pro.