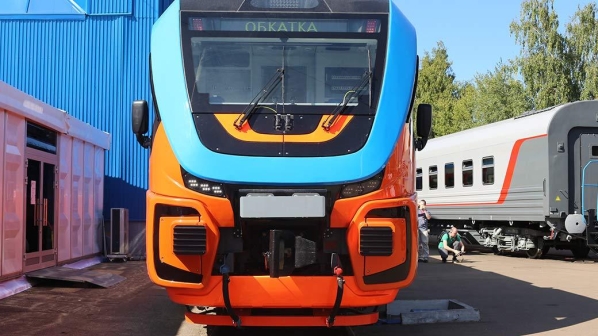 TMH has developed the RA-3 DMU.

The company relaunched the production of DMUs with the development of the RA-3 in the first half of the year, and had supplied 56 vehicles by the end of the year.

Locomotive sales grew across the board, with the number of diesel locomotives sold increasing from 216 to 281 units, shunting locomotives from 146 to 245 units, electric freight locomotives from 478 to 514 units, and industrial electric locomotives growing from 4 to 15 units. The sale of double-deck passenger coaches increased from 65 to 154 units.

The customer satisfaction index improved from 69 to 73, with the overall punctuality for SJ's long-and medium-distance trains reaching 90%, up from 86%.

DENMARK: Danish State Railways (DSB) has reported a pre-tax loss of DKr 1.6bn ($US 231.7m) in 2019, which the company says was due to a write-down on its long-distance and regional fleets.

Passenger revenue decreased 2%, which DSB says was primarily due to the lower price of fares on the Great Belt, a move that was designed to strengthen the competitiveness of rail.

Freight transiting through the country accounted for 9.4 million tonnes, a 3% increase compared with 2018.

Intermodal traffic has steadily increased, amounting to nearly 76,800 twenty-foot equivalent units (TEU) in 2019, an increase of more than 46% compared with 2018.

Vy’s rail freight operator CargoNet returned a profit of NKr 26m in 2019, up from an NKr 61m loss in 2018, the first profit for the new subsidiary.

POLAND: The 17.1 million tonnes of freight carried on Poland’s network in December 2019 was the lowest since February 2017, a 10.8% decrease year-on-year, in a trend that has begun to worry freight operators.

PKP Cargo says the rail freight market in Poland has been continuously shrinking year-on-year since December 2018.

In December 2019, traffic was decreasing at the fastest rate since the beginning of 2019 with 3.9 billion tonne-km undertaken, a 14% decrease.

“We have had a difficult year in the rail freight industry in Poland, but experts and analysts believe this year should be better,” says PKP Cargo president, Mr Czesław Warsewicz. “This is because the macroeconomic environment will improve, which will favour rail freight. I am thinking here in particular of the increase in implemented infrastructure investments.”