Construction of the line is already underway. 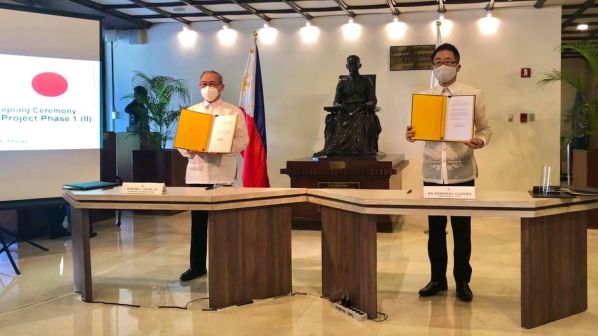 JAPAN and the Philippines have signed a second Yen 253bn ($US 2.3bn) official development assistance (ODA) loan package to finance the construction of the 33km underground Manila Metro project.

Full construction on the line from North Avenue in Quezon City to the Ninoy Aquino International Airport (NAIA) began in December 2019, after breaking ground in February 2019. The additional funding will extend the line from 15 to 17 stations, including 13 underground stations. The line aims to cut travel times from 1h 10min to 35 minutes. It will traverse the cities of Valenzuela, Quezon City, Pasig, Makati, Taguig, Parañaque and Pasay, with an initial capacity of up to 1 million passengers per day.

The contract for the loan was signed by Philippine foreign affairs secretary, Mr Teodoro Locsin Jr, and Japanese ambassador to the Philippines, Mr Koshikawa Kazuhiko. The 40-year loan has an interest rate of 0.10% per annum with a 13-year grace period. It follows  a Yen 104.53bn tranche agreed in November 2017.

Sumitomo and Japan Transport Engineering Company were awarded a Yen 57.5bn contract in December 2020 to supply 30 eight-car metro cars for the project, which are due to be delivered by March 2027.

Two of 25 tunnel boring machines (TBM) for the project are already in Manila. The remaining contracts for the contract are due to be awarded before president Rodrigo Duterte’s term in office ends in June 2022.