THE Rail Vehicle Systems (RVS) division of Knorr-Bremse achieved a 6.2% increase in revenue and an 8.5% improvement in Ebitda last year, according to preliminary results for 2018 released on March 7. 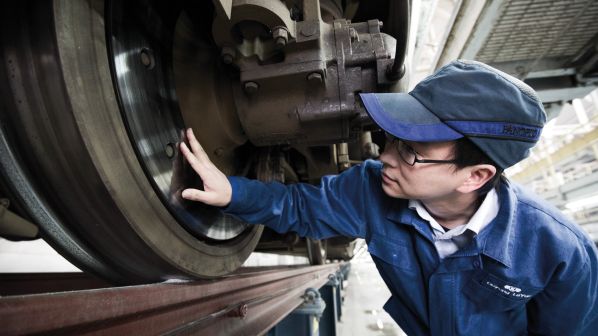 Knorr-Bremse employee checks a brake disc on a CRH high-speed train in China.

“Despite uncertain and volatile markets, the demand for Knorr-Bremse rail and truck systems rose to new heights,” says Knorr-Bremse’s CEO Mr Klaus Deller. “We are particularly proud to have won 26 projects for metro lines in China alone. With organic growth as well as strategic acquisitions in both divisions, we have paved the way for our active participation in the global megatrends urbanisation, eco-efficiency, digitisation and automated driving.”

Knorr-Bremse says growth in Europe in its RVS division was driven by its locomotives, regional and commuter, and metro businesses, while in Asia, its Indian original equipment business and Chinese Rail Services subsidiary grew particularly strongly. “In North America, the freight business showed a positive development,” says Knorr-Bremse. “Aftermarket revenues grew by 5.8% and their share of RVS revenues amounted to 40%.”