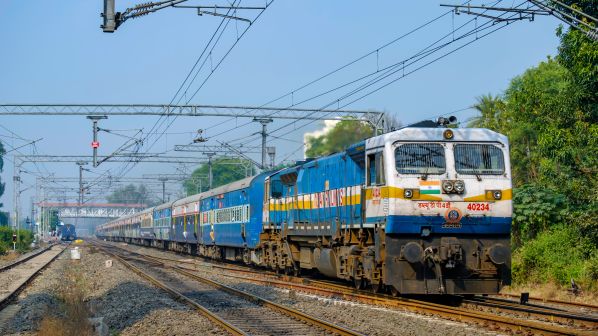 INDIAN finance minister, Ms Nirmala Sitharaman, unveiled a Rs 2.15 trillion ($US 29.3bn) capital budget for Indian Railways (IR) during the 2021-22 budget announcement on February 1. The outlay, which is Rs 540bn larger than in 2020-21, is the highest-ever budget for the railway.

The increase is in line with the Indian government’s strategy to increase public spending to counteract the adverse effects of the Covid-19 pandemic on the country's economy.

Rs 409bn will be spent on new lines, a 52% increase on last year, with Rs 261bn for track-doubling (+17%) and Rs 322bn (+138%) allocated for investment through Public Sector Undertakings, Joint Ventures and Special Purpose Vehicles.

As well as announcing that the Eastern and Western Dedicated Freight Corridors (DFC) will be completed by June 2022, Sitharaman said the 263km Sonnagar - Gomoh section and the 274km Gomoh - Dankuni section of the Eastern corridor will be developed through public-private Partnerships (PPP) in 2021-22. The two DFCs have been allocated Rs 160bn.

A detailed project report for the Delhi - Agra - Varanasi line has been completed and submitted to the Railway Board, while similar reports for the other lines are expected to be submitted over the coming financial year.

Sitharaman has also allocated Rs129bn for rail projects in Jammu, Kashmir and other hilly states, including Uttarakhand, Himachal and the Northeastern states.

The Indian government has also decided to launch a “National Monetisation Pipeline” of potential brownfield infrastructure assets such as the DFCs, with plans to create an “asset monetisation dashboard” to track progress and provide visibility to investors.

The government is planning to electrify 100% of the broad-gauge network, and improve passenger comfort through measures such as the introduction of vista dome LHB coaches.

Alternative transport systems such as the “Metro Lite” and “MetroNeo” will also be deployed as low-cost transport options.

There is currently 702km of metro operating across India, with another 1016km of metro and Rapid Rail Transport System (RRTS) lines under construction across 27 cities.

For detailed data in projects and fleet orders in India, subscribe to IRJ Pro.