The 16km third track project has been delivered by a joint venture between engineering firms Arup and Jacobs. 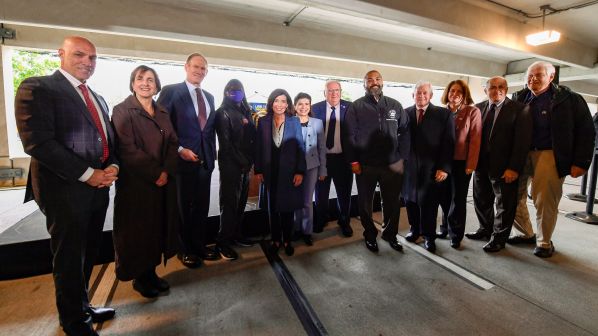 The project, for which a ground-breaking ceremony was held in September 2018 with major construction starting that year, has been completed on time and $US 100m under budget.

The new third track has been built by a joint venture between British engineering consultancy Arup and US engineering company Jacobs. It will help to reduce congestion and delays and will enable bidirectional operation in the area during peak hours. The two companies were responsible for project managing the works as well as overseeing rail operation and digital information management.

The new third track in the west of the island runs from Floral Park, on both the mainline and the Hempstead branch, to Hicksville - a major hub on the LIRR where the Ronkonkoma branch meets the Port Jefferson branch to form the main line running southwest to New York City’s Grand Central Terminal and Penn Station. It is intended that the new track will help with increasing LIRR’s overall capacity by 41% when New York’s Grand Central Madison underground station opens later this year and when renovations to the LIRR concourse at Penn Station are completed.

Arup and Jacobs’ contract is part of the $US 2.5bn Long Island Rail Road Main Line Expansion Project, which includes the rehabilitation of five stations at New Hyde Park, Merillon Avenue, Mineola, Carle Place and Westbury; the construction of train stabling facilities; the removal of eight level crossings the upgrading of seven bridges; and the installation of sound attenuation barriers and landscaping.

LIRR runs across the southeastern part of New York State from Manhattan to the eastern tip of Suffolk County on Long Island, giving it a main line length of 193km, and figures from the second quarter of 2022 give it a ridership of 216,500 per weekday. In 2016, the ridership was even higher at 354,800 per weekday, with the railway also noted as one of the world’s few commuter lines to run 24 hours a day all year round.

“This project is being delivered on time and $US 100m under budget, thanks to design-build contracting and many other new and innovative project management strategies,” says Metropolitan Transport Authority (MTA) chair and CEO, Mr Janno Lieber. “It’s especially incredible that this was all accomplished during a global pandemic and with no residential property takings… And this expansion will be a huge boon for Long Island businesses, since it will increase access to the region’s talent pool by enabling not only a 40% increase in LIRR service, but a huge uptick in reverse peak train frequency. It’s a win-win-win.”

“The completion of the … project connects commuters with a more resilient and flexible railroad with frequent service, modern stations, ADA accessibility and more travel opportunities for Long Islanders and visitors,” says governor Hochul. “I applaud the MTA, local communities and the hard-working women and men of organised labour who worked together to deliver this transformative project on time and under budget.”