SPEAKING in Rennes at the inauguration of the new high-speed line from Le Mans to the city, new French president Mr Emmanuel Macron made it clear that his government will prioritise improvements to “daily everyday transport” and rather than new major projects invest in maintenance to overcome backlogs affecting rail, road and waterway networks in France. 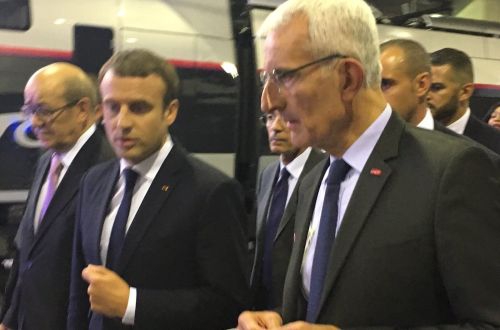 Macron said the technological success of the two new lines which opened on July 1 was not in doubt and he congratulated those who built them plus the politicians who supported and authorised the projects. He went on to say his government’s new approach would seek to prioritise getting existing infrastructure “up to par” so it enables people’s daily journeys to be smoother, more predictable and possibly quicker.

Making it clear he does not favour major new projects such as additional LGV lines he stated: “I am telling you the dream of the next five years should not be a new big project like this one” but that a key priority for his government was to improve daily life for French citizens and offering simpler more reliable transport systems were part of this.

He announced that a national council of all France's regions planned for mid-July would start the process of prioritising activities and Macron made it clear that this would result in de-prioritising or stopping some projects, saying “choices have to be made,” that a five-year plan for investment would be created.

He added that “the state cannot make any new financial commitments before there is clarity on future transport policy and its funding.” A new transport law, which will cover financing and will give the five-year prioritised plan a legal basis, is planned for early 2018. Mr Macron said this new law will also include measures to allow and encourage innovation across the transport sector.

Addressing the rail sector specifically, Mr Macron said his new government would “look at rail differently” with the aim of “improving rail.” He stated the large debt accrued by French National Railways (SNCF) had to be addressed and that change was necessary in the rail sector. He suggested that “SNCF must become a champion of mobility in the 21st century,” and that this would involve people’s jobs changing, singling out ticket offices as one area where existing roles may not have a long-term future.