TERMS for the merger of China's two largest rolling stock manufacturers, CSR and CNR, have been agreed during board meetings held by the two companies during the last two days. 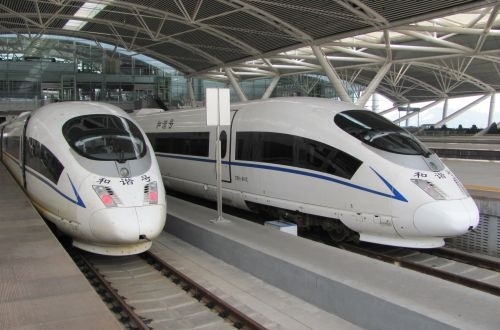 CSR will acquire CNR through share swaps on the Hong Kong and Shanghai stock exchanges, with each CNR share being exchanged for 1.1 CSR share. The merged company will be known as CRRC Corporation and will take over all the assets, liabilities, businesses, contracts and staff of the two companies.

Trading in CSR and CNR shares resumed today, trading having been suspended since October 27, and shares in both companies soared on confirmation of the merger deal.

According to Reuters, CRRC will be worth $US 26bn. A survey earlier this year by SCI Verkehr of new-build rolling stock production by the world's 50 largest rolling stock manufacturers, based on company results for 2012 and 2012-13, showed that the two big Chinese train builders already dominate the market, with CNR in top position with a rail vehicle turnover of €6.6bn followed closely by CSR with €6.3bn. Bombardier came third with a new build turnover of €4.2bn followed by Alstom on €3.3bn.

"Through the merger, CSR and CNR propose to build jointly a brand-new, multinational world-leading supplier of high-end equipment and systems solutions with rolling stock at its core," the two companies said in a joint statement. "The merger is expected to improve efficiency in the use of resources, effectively reduce operating costs and realise the internationalisation strategy, thereby promoting competition globally."

Each company will now stage extraordinary general meetings to allow shareholders to vote on the terms of the merger.