The contracts are worth more than €20m. 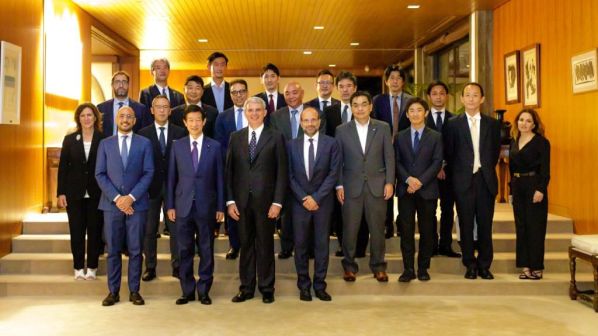 The contracts worth more than €20m were signed on May 27 at the Italian Embassy in Tokyo, in the presence of the Italian ambassador to Japan, Mr Gianluigi Benedetti, as well as representatives from Mitsubishi Electric, Sumitomo Corporation, Hitachi Hitech, Japan International Cooperation Agency (JICA), and the Asian Development Bank (ADB).

While names of the Japanese railway companies which signed the contracts were not released, Mermec vice president for international affairs, Mr Angelo Petrosillo, told IRJ they were “some of the most important Japanese railway administrators and private companies.”

“It has been a package of contracts which cover metro as well as conventional lines, and also a foreign country where we will jointly provide some measuring vehicles with Japanese technology,” he says.

“It's a very nice match between measuring vehicles, rolling stock pantograph inspection systems, as well as a system for track inspection and measuring of track geometry.”

“At the very beginning, we were Italians trying to sell something to Japan,” he says. “But afterwards we became a Japanese company with a very strong relationship with Italy, selling but also assisting our customers through the deployment and the service of the product. That was very, very important.

“I want to say that we learned a lot from our Japanese customers, because they are demanding, but on the other hand, they are really best in class. So we learned a lot and together with them we reached a level of performance which had never been reached worldwide.”

This includes installing Mermec technology on JR West’s Shinkansen high-speed trains. Mermec has also begun exporting the technology it has developed to other countries in the region such as India, the Philippines and Vietnam.