The 15-year contract includes the operation of 2.7 million train-km annually for the first five years. 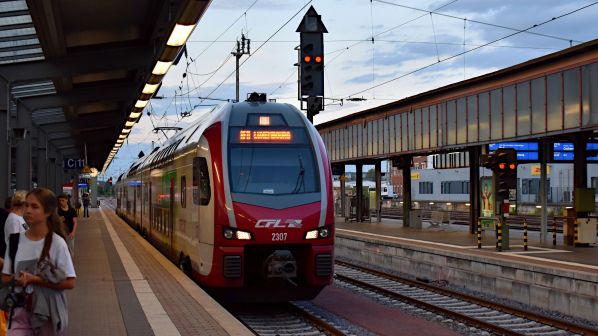 NORTHERN Rhineland-Palatinate regional rail authority SPNV-Nord and the German state of Saarland have published a tender notice in the Official Journal of the European Union for a contract to operate the so-called MoselLux regional network in western Germany and Luxembourg.

The 15-year contract, which is due to start in December 2024, calls for the operation of 2.7 million train-km annually for the first five years, increasing to 3.1 million train-km from December 2029, with options for a further 600,000 train-km per year in each phase of the contract.

The tender calls for a uniform fleet of EMUs, each with 250 seats with increased legroom, tables in both first and second class, and capacity to accommodate 30 bicycles.

Revenue risk will lie with the tendering authorities.

From December 2024 the contract will begin on the following routes:

From December 2025, RB 10 services from Koblenz to Kaub in the Rhine valley will be added to the network.

The electrification of the 10.5km Pünderich - Traben-Trarbach branch will enable the introduction two new Regional Express services from December 2029: RE 85 Koblenz - Traben-Trarbach and RE 86 Traben-Trarbach - Trier main station. Services on the single-track branch currently operate as an hourly shuttle from Traben-Trarbach to Bullay, where there are connections to Trier, Luxembourg and Koblenz.

In December 2021 German infrastructure manager DB Network published an international tender for a contract to provide planning services for electrification of the branch.