THE British government has confirmed it has reduced infrastructure manager Network Rail’s (NR) enhancements budget for Control Period 6 (CP6), which runs from April 2019 to March 2024, from £10.4bn to £9.4bn. 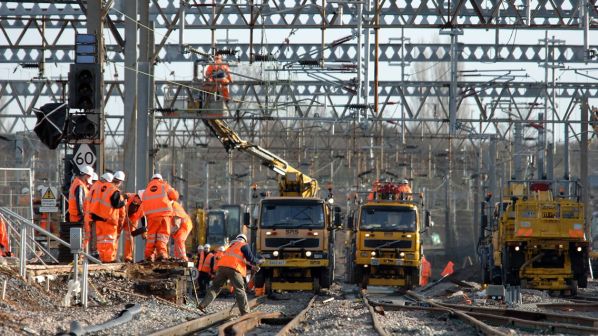 When the Statement of Funds Available (Sofa) for CP6 was announced in October 2017, the government said it would allocate funds for major enhancements separately, based on the principles set out in a Memorandum of Understanding on rail enhancements agreed by the Department for Transport (DFT) and NR in March 2016. This is a departure from previous control periods, when enhancements were budgeted as part of Sofa.

A NR spokesperson told IRJ that because of this change, projects are now only allocated funding once they’ve been planned and the business case has been presented for approval. As a result, there were no projects that would specifically be cut as a result of the change.

“We’re reviewing and assessing the projects portfolio and working with stakeholders and the DFT to figure out which ones we’re prioritising in the coming months,” the spokesperson said.

Britain’s Railway Industry Association (RIA), which represents the rail supply industry, was dismayed by the announcement.

“Recent confirmation following the spending review that rail enhancements investment will reduce by more than £1bn over the current five year funding period is very disappointing,” says RIA chief executive, Mr Darren Caplan. “Rail enhancements are essential in ensuring our rail network is fit for the future, improving reliability, connectivity, customer experience and helping to reduce carbon emissions. Taking our foot off the pedal now on rail investment will not help for when passengers return following the coronavirus pandemic.”

Caplan says the industry is still unsure what projects are due to be delivered under the programme.

“We were told earlier this year that there are more than 80 projects in the government’s Rail Network Enhancements Pipeline, yet with the news today that there is over £1bn less in the funding pot, it is unclear what schemes will be going ahead and what will not be,” he says. “In line with RIA’s Speed Up Rail Enhancements (Sure) campaign, we strongly urge the government to publish this list of rail enhancement projects as soon as possible, to help rail businesses plan and invest at what is such a critical time for the UK economy.”

“Alongside the billions invested in supporting our railway through the pandemic, protecting services passengers depend on and frontline jobs, we continue to invest significant sums in modernising our railway for the reliable, punctual, safe journeys people deserve,” a DfT spokesperson said.

“We must ensure that, where necessary, projects are reviewed to reflect the changing demand for rail services as a result of the pandemic. We continue to deliver ambitious improvements, investing in key priorities including the Transpennine Route Upgrade, restoring lines and stations closed during the Beeching cuts and in High-Speed 2 (HS2), with an unrelenting focus on levelling up our country and ensuring all communities have the connections they need to support growth and prosperity.

“We must also strive for a better deal for taxpayers, given the scale of their support for railways. We are therefore closely examining all of our spending to ensure that it is efficient and represents value for the taxpayer.”