Network Rail investment plan found to be unrealistic and undeliverable

A review of Network Rail's (NR) £38bn 2014-2019 investment programme conducted by its chairman Sir Peter Hendy has found it to be "unrealistic and undeliverable," with the result that extra funding is needed to complete some projects while others will be delayed. 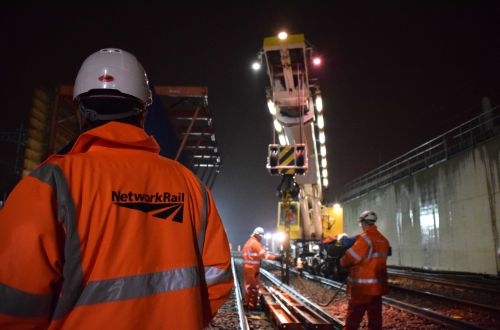 Construction of the new flyover near Heathrow Airport on the GWML.

Hendy was appointed NR chairman in July 2015 and was asked by Britain's secretary of state for transport, Mr Patrick McLoughlin, to conduct a thorough review of the programme as the cost of some projects, such as electrification of the Great Western Main Line (GWML) from London to Oxford, Newbury, Bristol and South Wales, was spiralling out of control and running late.

"Whilst the enhancement and investment programme in railway Control Period 5 (CP5: 2014-2019) is larger than any previous programme, for a variety of reasons the cost and timescales on a small number of significant enhancement projects have increased beyond expectation," Hendy says. "These have included over optimism on costs and timescales, inadequate planning processes both within and outside NR, and changes in scope during development and delivery."

Hendy says that the decision to make NR a state-owned company curtailed its access to government-backed debt which required for more disciplined capital rationing. "These have all contributed to the funding challenge as has the realisation that some large projects should have been managed on a holistic basis rather than piecemeal," Hendy says.

In order to complete the majority of projects by 2019, NR will have to provide an extra £1.8bn from its own resources partly through the sale of some property, while the government will need to increase its limit on NR's government borrowing by £700m. Completion of the remaining projects will be deferred beyond 2019, but Hendy says no projects will be cancelled.

Hendy says the huge investment programme has stretched the resources of NR and its contractors to the maximum, with signalling resources particularly in short supply.
"NR and its suppliers need to redouble their efforts to recruit apprentices and engineers to complete these works," Hendy says. "In addition, NR needs to employ more senior staff in a very competitive market to effectively deliver works paid for by public funds."

Two electrification projects, Manchester - Leeds - York Trans-Pennine and Bedford - Sheffield Midland Main Line, were halted while the review was conducted. While work restarted in September, both projects will now take longer to complete with Trans-Pennine scheduled for completion in 2022 and the Midland Main Line in 2023.

Work to update the GWML electrification project has not yet been completed, and while the bulk of the work will be completed by 2019, electrification between Cardiff and Swansea has been delayed, and the overall cost has soared from £874m in January 2013, to £1.65bn in September 2014, £2.5bn in October this year, and now £2.8bn at 2012-13 prices.

NR says it is currently working with the Department for Transport to update the CP5 enhancement delivery plan for each project by early December, but it warns that: "experience of delivering complex major programmes suggests that there will be some slippage in the revised programme." NR will also have to obtain approval from the Office of Road and Rail (ORR) on the revised programme.