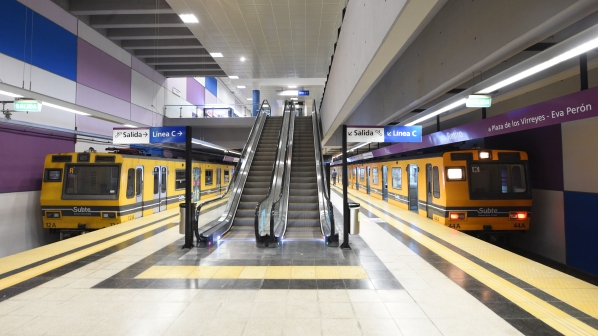 INCUMBENT operator Metrovías began operating a new 12-year operating contract on the Buenos Aires Subte metro on December 1. A possible three-year extension of the contract is included in the final contract signed in mid-September 2021.

The original timescale for the tender was for a contract to be awarded in October 2018 with operation starting in January 2019, but this slipped. In mid-December 2019 Paris Transport Authority (RATP) working with Alstom withdrew its bid, whilst Keolis bidding with Transport for London (TfL) and Argentinian civil engineering company Helport, a subsidiary of Corporación América, dropped out in February 2020. Both consortia cited the significant changes in macroeconomic conditions in Argentina as their reason for withdrawing from the process.

The final offer was submitted in early 2020 by the sole remaining bidder, Metrovías, which is owned by Argentinean company Roggio Group, working with German Rail (DB) and Siemens as advisers, was evaluated against the original criteria set by the Buenos Aires regional government before the contract was awarded.

Under the new contract, which was awarded in January, Metrovías will be paid based on the effective fulfilment of the scheduled service using a calculation based on the number of metro cars in service and the distance operated. Payments will be monthly and are designed to incentivise the operator to optimise maintenance to have the fleet available to operate the planned timetable. Metrovias has proposed investment in maintenance facilities. Predictive maintenance systems will be introduced across the network covering station facilities such as escalators, stairs and lifts as well as trains, tracks and other facilities.