THE New Zealand government has allocated in $NZ 1.2bn ($US 718m) to rail in its 2020 budget, which was released on May 14, as it looks to ease the effects of the deep recession brought on by the coronavirus pandemic. 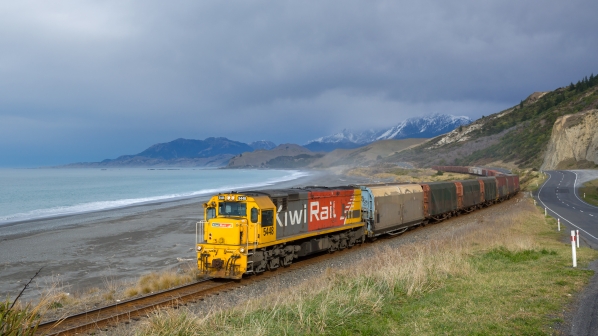 Proposed changes in the land transport (rail) legislation bill will provide long-term certainty for rail by channelling network investment through the National Land Transport Fund. The $NZ 148m will be used to support the fund once the bill has been passed.

The $NZ 246m infrastructure funding, which is spread over two years, will include increased investment in track, bridges, tunnels and signalling around the country, including replacing rails, sleepers and ballast; drainage works; civil works to strengthen railway infrastructure and prevent coastal erosion; and upgrades to the train control system.

The investment will cover the most critical parts of the national rail network with the highest expected freight demand, such as the “Golden Triangle” between Auckland, Hamilton and Tauranga, the North Island Main Trunk Line, the Midland Line from Rolleston to Stillwater and the Main South Line from Lyttleton to Rolleston, as well as raising the standard of other regional lines that have suffered from significant under-investment.

The $NZ 400m funding to replace the three Interislander ferries, which carry 800,000 passengers, about 2.7 million lane metres of cars and trucks, and 450,000 lane metres of freight wagons every year, will partially cover the $NZ 1bn price tag of the project. KiwiRail is looking at financing options to cover the remaining cost.

The new ferries, which will be nearly 40m longer and at least 5m wider than the current vessels, are designed to meet expected freight and passenger growth over the next 30 years, and will be delivered in 2024 and 2025 respectively.

“For our customers this investment sends a clear signal that rail has a big future and gives them the confidence to get on board,” says KiwiRail group chief executive, Mr Greg Miller. “Our customers want to make greater use of rail and we’re seeing more road operators reach out for our support as their networks contract. We’re here to help them.

“This funding recognises that rail has a greater role to play in New Zealand’s transport sector, and that it can make a valuable contribution towards lowering our transport emissions, reducing road congestion and saving in road maintenance costs - which benefits our nation as a whole.”

“Rail is a critical part of our integrated transport network,” says state owned enterprises minister, Mr Winston Peters. “Not only is investment essential to address decades of under-investment, but further investment in rail will play an essential role in our economic recovery post-lockdown.

“The investment in rail infrastructure is not only helping to secure the thousands of existing jobs at KiwiRail but will be a huge boost to New Zealand’s civil engineering and construction sector, with hundreds of contractors, and their material suppliers, needed nationwide for track renewal, mechanical facility upgrades and ferry terminal projects.”