PROFITS at Netherlands Railways (NS) dropped considerably in 2017 to €24m from €212m in 2016 mostly due to the €41m fine imposed against the railway by Dutch regulatory body ACM for the irregularities associated with the Limburg regional tender, and the absence of real estate sales of €117m which helped to boost profits the previous year. 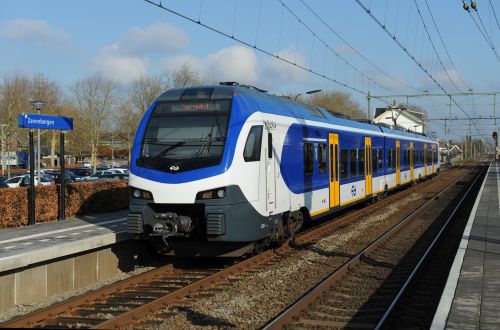 However, NS did increase turnover by €28m to more than €5.1bn in 2017 following an increase in ticket fares and increased revenue from activities at stations. The railway also reported higher turnover from its activities outside of the Netherlands through its Abellio subsidiary. In Britain, where Abellio is involved in the ScotRail, Greater Anglia, and West Midlands franchises, the operator reported revenues of €1.74bn although its British activities were impacted by the weak pound. In Germany, where Abellio is the fourth-largest operator, it recorded sales of €245.7m.

The sale of bus subsidiary QBuzz to Trenitalia also had a negative impact on revenue.

NS says it met the performance criteria outlined in its Core Network Concession for 2017. Punctuality improved by 1% to 91.6% for trains arriving within five minutes of schedule. Connections between NS trains and regional services also improved to 94.5% compared with 94.1% in 2016 based on measurements taken at 18 stations. This year results will be recorded at all 28 stations where NS and other operators’ services meet.

Performance on HSL South, however, declined during the year, with passenger satisfaction falling from 78% to 77%. Punctuality on the high-speed line was 83.5%, which was in line with expectations.

Among the other highlights of the year was the withdrawal of NS’ final diesel trains, DM90 two-car sets on Zwolle - Kampen and Zwolle - Enschede regional services, and from January 1 all rail operators in the Netherlands are sourcing their electricity from wind power. In addition, NS’ bike rental service, OV Fiets, increased use from 2.4 million riders in 2016 to 3.1 million last year as the fleet was expanded from 8500 to 14,500 bicycles.