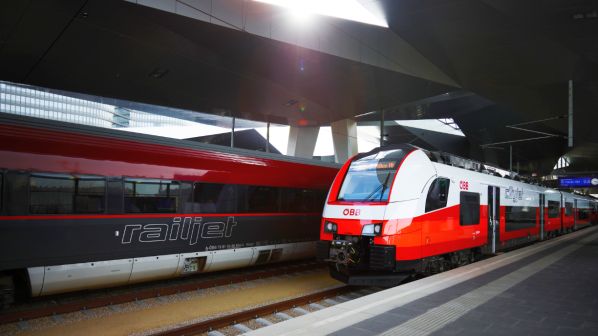 ÖBB achieve a small profit increase in 2019 but faces a difficult year in 2020.

ÖBB carried 267 million passengers in 2019, which is a new all-time high, compared with 261 million in 2018. As a result, the passenger division achieved a pre-tax profit of €100m compared with €91m the previous year.

Rail Cargo Austria recorded a drop in freight traffic from 113 million tonnes in 2018 to 105 million in 2019. Volume in Austria dropped from 78.6 million tonnes to 74.3 million with freight activity in most other countries decreasing as well. RCA’s share of the Austrian freight market dropped again in 2019 and is now at 68%.

ÖBB’s infrastructure division reported a pre-tax profit of €38.3m compared with €45.3m in 2018. ÖBB Infrastructure invested more than €2bn in 2019. The 130km Koralm Railway between Graz and Klagenfurt is now fully under construction, and around half of the tunnels for both the Semmering Base Tunnel and the Brenner Base Tunnel have been dug.

ÖBB plans to invest more than €2.4bn in rail infrastructure in 2020 and the government plans to increase this by a further 5%.

ÖBB is at present revising its 2020 budget in the wake of the coronavirus pandemic. “We quickly implemented measures to stabilise the company and secured liquidity,” says ÖBB’s CEO Mr Andreas Matthä. “Nevertheless, the result will suffer in 2020, with freight transport under particular pressure. The situation in freight transport is challenging for all European railways. Nevertheless, Rail Cargo Group is one of the few freight railways in Europe that did a positive job in 2019. In the future, however, transport policy measures at the EU level will be required to ensure the sustainable protection of rail freight transport, so that competition between rail and road becomes a little bit fairer.”

ÖBB is negotiating revisions to its existing PSO contracts as it is operating a weekend passenger timetable even though passenger numbers do not warrant even this level of service.

State aid for RCA will not be possible as the Austrian government will only provide financial support to companies suffering from drops in revenue of at least 40% as well as the need to treat all freight operators equally under Austria competition law.