$C 139.5m is to be spent on three new passenger trains from Siemens Mobility. 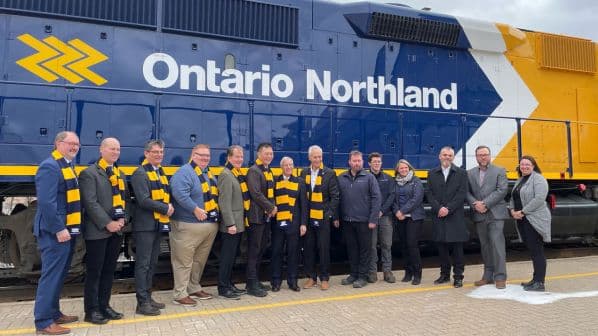 Officials and dignitaries celebrate the announcement of the Ontario government's investment in new trains for the revival of the Northlander service.
Photo Credit: Siemens Mobility

THE Ontario government has announced that it is to spend $C 139.5m ($US 102m) on purchasing three trains from Siemens Mobility as part of its plan to reinstate the Northlander passenger service between Toronto and Timmins by the mid-2020s.

The announcement of the new trains follows Ontario’s April 2022 investment of $C 75m to help revive the service, and the release of an Updated Initial Business Case (UIBC) to advance planning of the preferred route, which will run from Toronto to Timmins with a rail connection to Cochrane, where there will be another connection with the Polar Bear Express service to Moosonee.

When the Northlander service is reinstated, the Ontario government says it will be operated from four to seven days per week, based on seasonal travel demand. The government estimates annual ridership will be between approximately 40,000 and 60,000 passengers by 2041.

The rolling stock contract awarded to Siemens Mobility “demonstrates real progress, as we continue to take concrete steps to build a better transportation network for the north,” says Ontario’s associate minister of transportation, Mr Stan Cho. He added that the return of Northlander service “will support our northern industries and resource sectors and provide a safe and reliable transportation option for Northern communities, especially in the winter months.”

“This purchase is a key next step to support the province and Ontario Northland’s target of a mid-2020s in-service date for reinstating Northeastern Passenger Rail,” says Ontario Northland interim president and CEO, Mr Chad Evans.

For detailed data on fleet orders from around the world, subscribe to IRJ Pro