Pan Am Railways up for sale

THE Pan Am Class 2 railway in the United States has been put up for sale, with BMO Financial Group appointed to handle a transaction on behalf of principal owner, Mr Tim Mellon, and other investors. 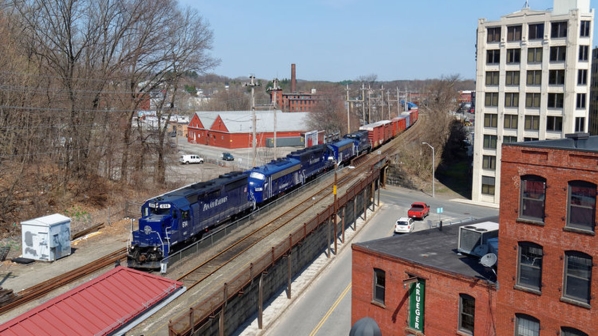 The more than 2700km network was assembled by Mellon in the 1981, with the Maine Central, Boston and Maine, and Delaware and Hudson railways merged to form the Guilford Transportation System. The name and logo were purchased from the American airline after it went out of business in the late 1990s.

An industry observer, who spoke with IRJ’s sister publication Railway Age on the condition of anonymity, confirmed the sale, and outlined a number of potential buyers for the network.

“You may want to take a look at the map and see how different pieces of Pan Am Railways fit with other things in the neighbourhood,” the insider said. “For example the east-west main line across Massachusetts, in which it has a 50/50 ownership with Norfolk Southern (NS), the Pan Am Southern.”

With the highest operating ratio among the North American Class 1’s, the insider says NS could be looking to avoid lower-rated commodities such as paper, a major source of freight on the Pan Am railway.

“So how much interest is there in NS taking over the whole thing? I’m not sure. NS made a big deal out of opening and then doubling the size of Bellevue Yard in Ohio some years ago, and now is closing it. So the shoes that fit yesterday may not fit today.

“Next, Canadian National (CN) is expanding its footprint into the United States. CN’s acquisition of the Messina Line in New York State from CSX has hit a snag at the STB, but it’s still under discussion.”

The source pointed to an interview between Railway Age editor in chief, Mr Bill Vantuono, and CN president, Mr JJ Ruest, where Ruest said CN was looking to develop a “roadmap” that would give customers information on where their freight was headed along the network.

“If CN owned the Pan Am it could put that on its roadmap. CN is also looking to create short multimodal lines in the US. So if CN took ownership of the Pan Am at Auburn, Maine, it could start building multimodal services that would feed its own network.

“Then there’s Canadian Pacific (CP), which is just finishing up its acquisition of the Central Maine & Quebec, so maybe its hands are full. On the other hand, CP does have a direct current connection with Pan Am in Mechanicsville, New York. Maybe it would step into NS’s shoes and pick up the Pan Am Southern.

“Also, it’s a 688km railroad from Mattawamkeag, Maine, all the way to Mechanicville, New York. Does anybody want that whole piece of railroad?”