Passengers up but profits down at VR Group 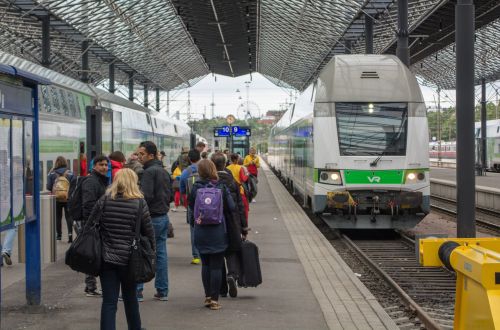 VR Group’s turnover was €186.7m in 2016, and the company says adjustments to the price of long-distance passenger services explains the decrease in revenue. Nevertheless, operating profit was strong in all business sectors in Finland, with VR Group CEO Mr Rolf Jansson citing poor performance at VR Track’s Swedish subsidiary’s for overall profit not reaching a “satisfactory level.”

“In 2016, we managed to increase passenger trips and VR freight volumes,” Jansson says. “VR Track’s construction business has developed positively in Finland. However, the group’s profit was not at a satisfactory level due to the weak performance of VR Track’s Swedish subsidiary. Improving the competitiveness of the various existing and new development programmes will continue.”

The passenger load factor increased significantly to 41.7% compared with 34.1% in 2015. Total passenger train journeys increased by 9% to 82.1 million with a 2.8% increase in long-distance journeys, an 8.2% increase in Allegro passengers travelling between Finland and Russia, and 10.2% increase in commuter journeys. The long-distance competitiveness programme was launched in 2015 with the goal of reducing costs by €50m, and it has already found €41.9m of savings, with the remaining expected to be secured in 2017.

The group made investments of €123.1m in 2016, including €21.5m on leasing contracts and €59m of new rolling stock. The increase in passenger numbers has continued in 2017, with VR set to introduce several new services to passengers, including more restaurant cars and an upgraded seat reservation system.

The board of directors has proposed paying a €90m dividend to the state.