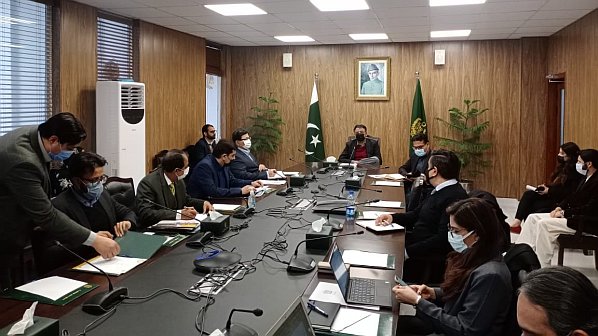 The meeting regarding the KRC proposals was held on January 25.
Photo Credit: Twitter.

THE Pakistan federal government has approved a proposal for the construction and operation of the Karachi Circular Railway (KCR) using a public-private partnership (PPP) model.

Construction of the 43km double track line is expected to take around three years, and will cost Rs 220 billion ($US 2.92bn).

Mr Asad Umar, minister for planning, development and special initiatives chaired the PPP Authority Board meeting in Islamabad on January 25, where the proposals were reviewed.

Under the proposal, the private sector will finance the construction, civil works, electrical and mechanical works, as well as the operations and maintenance of the KCR.

The Pakistan government will provide capital viability gap funding in order to improve the financial viability of the project. This is expected to be around Rs 80-90bn which would be provided in the first three years of the concession being operational.

The PPP Authority Board also decided that the railway board would be requested to make 13 properties on the route available for lease for 99 years. This is designed to meet the initial financing since the profit will ultimately go to Pakistan Railways (PR).

The KCR is expected to serve 457,000 passengers per day when it opens, and this is expected to rise to one million by the end of the initial 33 year concession period. Electric trains will operate on the railway for 17 hours each day.

Asad said that KCR is an important part of the Karachi transformation plan and will play a pivotal role in providing an affordable and reliable public transport system.

For more information on infrastructure projects in Asia, subscribe to IRJ Pro.