Germany is fourth from bottom in an analysis of per capita rail infrastructure spending. 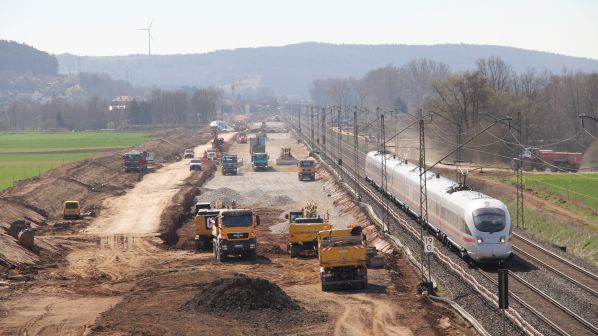 GERMANY’s Pro-Rail Alliance (Allianz pro Schiene) says that according to a study of European rail infrastructure investment per capita in 2021 conducted with SCI Verkehr, Germany remains near the bottom even though it is investing more in rail infrastructure than it ever has.

“With €124 per inhabitant, the Federal Republic [of Germany] invested more in the rail network than ever before,” says Mr Dirk Flege, managing director of Pro-Rail Alliance. Unfortunately, Flege points out that other European countries have also significantly increased investment in their rail networks, so that Germany is still near the bottom.

“Germany overtook Italy for the first time in a per capita comparison in 2021,” says Flege, thanks to an increase from €88 per capita in 2020. Each year, Pro-Rail Alliance works with management consultancy SCI Verkehr to determine how much money selected European countries are investing per capita in rail infrastructure.

In fact, Germany came fourth ahead of France, Spain and Italy (see graph). The leaders in 2021 were Luxembourg with €607 per inhabitant and Switzerland with €413. With per capita investment of €315, Norway came third for the first time. Austria is in fourth place with €271. Germany lags behind Britain with €158 euros, Denmark with €157 and the Netherlands with €147.

According to the Pro-Rail Alliance, the significant increase in investment in Germany in 2021 is “partially due to a special effect.” Funds provided by the federal government to German Rail (DB) in connection with the 2030 climate protection programme were subsequently paid out in 2021 for 2020 as well. “After this special effect, Germany is already pre-programmed to fall back again in terms of per capita investment in 2022,” Flege says, referring to the budget for the current year. "That fits neither with the ambitious goals of the current coalition agreement nor with the increasing demand for rail transport.”

“Germany's rail network groans under the traffic load,” says Ms Maria Leenen, managing director of SCI Verkehr. “The demand for freight and passenger transport by rail is huge. More and more companies and people want to use the railways but are encountering capacity bottlenecks because the rail infrastructure is undersized and underfunded. The bad thing is that Germany is also lagging far behind in the EU comparison when it comes to digitising the rail network.”

According to the SCI Verkehr study, ETCS Development until 2030 in Europe, Germany, in contrast with other countries, is planning hardly any significant measures by 2030 and is clearly missing its self-imposed goal of equipping the entire federal railway network with ETCS by 2035. “If we stick to the projects and political decisions that are known today, digital rail will still not be a reality in Germany in 2040, while countries such as Belgium, Denmark and Switzerland have long since done their homework and are thus also enabling end-to-end transport throughout Europe,” Leenen says.