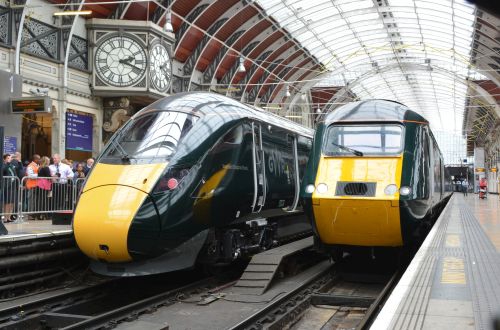 An Hitachi IEP train alongside an HST at London Paddington.

Revenue fell by 3% from £1.3bn in 2015-16 to £1.27bn in 2016-17. First Rail’s performance was affected by reduced subsidy payments and remapping of some routes under its new TransPennine Express (TPE) franchise. Passenger traffic grew by just 0.7% reflecting a slowdown in growth, modal shift to road due to low fuel prices, the effect of non-recurring events such as the Rugby World Cup, and the scale of infrastructure work taking place on the Great Western Main Line.

“First Rail like-for-like passenger revenue growth was 1.3%, with the slowdown seen across the industry compared with the prior year clearly exacerbated by the magnitude of the infrastructure upgrade activity on our Great Western Railway (GWR) franchise in the year,” says First Group’s CEO Mr Tim O’Toole. “First Rail’s trading margin is also rebasing to reflect the terms of the new TPE franchise and GWR direct award, albeit partially mitigated with cost efficiencies.”

First Group faces further challenges with its GWR franchise, which is expected to run until April 2020, due to severe delays with the electrification of the Great Western main line from London to Bristol and Cardiff. So far, electrification has only been completed as far as Maidenhead, 39km west of London, which will severely restrict the operation of its fleet of Bombardier EMUs acquired for commuter services, while its Hitachi IEP bi-mode trains are unlikely to be able to deliver promised journey-time reductions until electrification is completed at least as far as Swindon.

First Group, under its 70:30 partnership with MTR Corporation, will take over the South Western franchise covering services from London Waterloo to Portsmouth, Southampton, Weymouth, and Exeter on August 20. The franchise runs until 2024. First Group also plans to launch its second open-access service after Hull Trains on Britain’s East Coast Main Line in 2021 when it will introduce a service between London King’s Cross, Newcastle-upon-Tyne and Edinburgh. The new single-class service is aimed at encouraging people who currently travel by air or road to switch to rail.