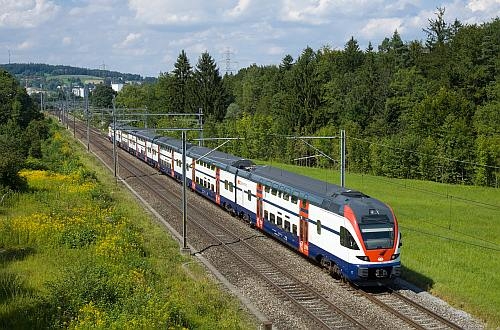 However, this impressive increase was mainly due to a 55% rise in real estate profit to SFr 395m, resulting from increased property sales. SFr 150m of this will go to infrastructure financing and the rest to the SBB Pension Fund. The group's operating revenue rose by 2.7% to SFr 8.4bn, while operating expenditure fell by 2.7% to SFr 8.2bn.Passenger revenue increased by 8.1% to SFr 104m, while passenger-km rose by 2.6% to 18.2 billion. SBB carried 1.18 million passengers a day during 2014, up 3.7% on 2013.

The railfreight sector also did well; SBB Cargo, which was still in the red two years ago, more than doubled its profit from SFr 15m in 2013 to SFr 33m last year with a 17.6% rise in traffic to 14.5 billion tonne-km. Contributing towards this was SBB Cargo International which achieved a profit for the first time after only four years of operation with a net income of SFr 1m.

SBB Infrastructure recorded a deficit of SFr 66m due to higher expenditure on maintenance, but this was still an improvement on the loss of SFr 72m in 2013.

The outlook for the current year is challenging in view of the strong Swiss franc, especially for international operations on key north-south and east-west corridors and the import/export business.

The launch of the new SwissPass in August this year should help SBB to improve marketing to tourist destinations. A major restructuring of the timetable is planned at the end of the year, when the second stage of the new cross-city link in Zürich comes into service, improving east-west links. There will be further significant changes in 2016 with opening of the Gotthard base tunnel.