RUSSIAN Railways (RZD) reported a 4.1% year-on-year increase in revenues across its 192 subsidiaries to Roubles 1.082 trillion ($US 18.99bn) in the first six months of 2017, with the result underpinned by strong freight and track access revenues. 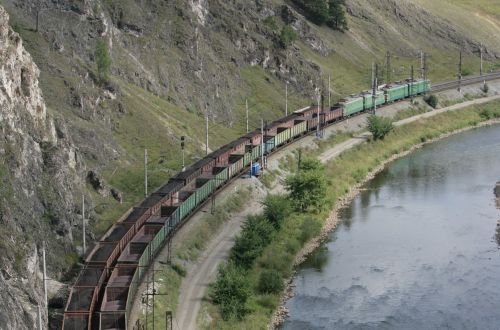 Freight turnover increased by 7% in the first six months of the year while freight and infrastructure access revenue increased by 10.5% to Roubles 717bn. RZD says this was the result of improved economic conditions and average yield rate growth.

Revenue from passenger services also increased by 10.5% year-on-year to Roubles 102bn, with RZD crediting increasing patronage, a fall in the VAT rate from 10% to 0%, and revenue from the Moscow Central Ring, which became operational in September 2016, for the result.

The improvements in revenue enabled RZD to report an 11.2% increase in Ebitda in the first six months, and a net profit of Roubles 53bn, up from Roubles 45bn in the same period in 2016.

However, RZD did report a 0.7% increase in costs to Roubles 987bn due to increases in the price of electricity, and higher fuel costs due to the growth in freight volumes and price inflation in the oil sector. The company’s debt load also increased to 208% of company revenue compared with 194% on December 31 2016 due to credit expansion to support investment and the fall in the value of the rouble. Nevertheless, RZD says that with this figure below the 250% threshold, it remains acceptable.

RZD invested a total of Roubles 254bn in capital projects in the first half of the year, which compared with Roubles 198bn in the same period in 2016. These investments focused on renewing locomotives, and improving capacity and safety on key routes.

Indeed, Mr Alexey Shilo, RZD’s director of commercial activities and CEO for the centre for commercial transport services, told this week’s Eastern Economic Forum in Vladivostok, that RZD’s main current projects are to increase the capacity of both the Baikal-Amur Main Line and Trans-Siberian Railway.

He says that within the context of increasing coal volumes on the Russian network - coal accounted for 52% of total exports in the first half of 2017 following increased demand from the east - adding more capacity on the BAM and Trans-Siberian are important to sustain growth of existing coalfields and for future mining projects.

The first stage improvement plans will enable the Komsomolsk - Vanino line to meet its target of 42-43 million tonnes per year. However, it is still someway short of the 80 million tonnes processing capacity when all of the coal terminals currently under construction in Vanino come online.

“Loading rates are currently so high that we are going to meet the 2020 traffic volume target in 2019,” Shilo says. “We have therefore set the construction companies the task to speed up the first stage completion of these projects as much as they possibly can.”

Shilo adds that RZD is working on options for the second phase of infrastructure improvements on the routes, including electrification of the Komsomolsk – Sovetskaya Gavan section.

In addition, he says RZD is working to improve the efficiency of its existing infrastructure, including by introducing new traffic and infrastructure management systems, optimising last mile operations in particular those that optimise coal handling at ports and terminals, and increasing coal wagon axle loads from 23-25 tonnes to 27 tonnes.

“We are focusing on the activities which can deliver fast and sustainable results,” Shilo says. “We are implementing these projects on a first-priority basis.”

• RZD president Mr Oleg Belozerov and vice-president and operations director of the New Development Bank, Mr Zhu Xian, signed a memorandum of understanding at the Eastern Economic Forum on September 6, a key step in consideration of credit from the bank for the 770km Moscow - Kazan high-speed line.