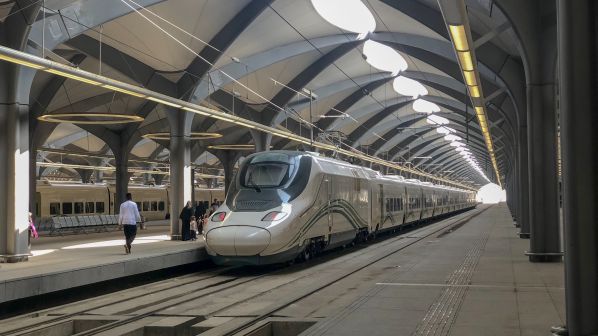 SAUDI Arabian minister of transport and Saudi Railways Company (SAR) chairman, Mr Saleh Bin Nasser Al-Jasser, has unveiled a raft of economic and industrial opportunities worth more than Riyals 1bn ($US 266.6m) as the country looks to attract private partners to its expanding rail sector.

Al-Jasser outlined the opportunities during the launch of the virtual Railway Industrial Opportunities Forum on March 17 as part of the National Industrial Development and Logistics Program (NDLP). The minister says the forum aims to expand partnership opportunities between the public and private sectors, including the development of rail infrastructure. He also indicated that the network could be opened to private freight and passenger operators in the future.

During the forum, Al-Jasser announced plans to expand the Saudi network by more than 8000km, double freight and passenger capacity, and adopt modern technology and advanced technical solutions to reduce rail’s environmental impact. He said the country’s 5500km network had already carried more than 33 million passengers and more than 70 million tonnes of freight over the past 10 years.

The CEO of SAR, Dr Bashar bin Khalid Al-Malik, encouraged the private sector to invest in opportunities as partners, saying that it was now a strategic objective to improve the localisation of the railway industry supporting the network.

He added that since the merger of Saudi Railways Organisation and Saudi Railways in 2021, SAR has focused on developing local industrial capabilities by encouraging partnerships and knowledge transfers with international manufacturers.

SAR has also called for expressions of interest to design, supply and maintain its next generation of inter-city passenger trains. The first trains are due to enter service in 2025, and will increase capacity on the Riyadh - Dammam line. A further batch could be ordered for the Riyadh - Hail section of the North-South Railway. The trains will be equipped with ETCS, with the contract to includes 10 years’ maintenance.

On March 14, SAR awarded CAF a five-year, €200m service contract including technical support for the Saudi operator’s 18 CAF-built push-pull trains, which operate on the Riyadh - Dammam and Riyadh - Qurayyat lines.

The contract also includes an agreement to establish the Engineering Excellence Centre, a joint engineering department. The department will train SAR staff with the necessary operating and maintenance skills for the train fleet, as well as adapt SAR’s facilities for the overhaul of the trains, which were delivered in 2015.