SWISS Federal Railways (SBB) can look back on a successful year in 2016 with records in several areas: passenger journeys rose by 3.5% to 1.25 million per day, total freight traffic was up by 9.9% to 16.6 billion tonne-km, and the network was more intensively used than ever before. 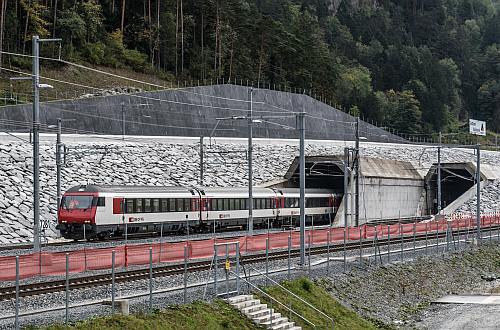 A train emerges from the new Gotthard Base Tunnel.

Crowning it all was the opening towards the end of the year of the world’s longest railway tunnel, the Gotthard Base Tunnel. Both the new chairwoman of SBB’s board of directors, Ms Monika Ribar, and CEO Mr Andreas Meyer agreed that it was “an emotional but successful year.”

Operating income was up by 2.3% at SFr 9bn ($US 9bn), mainly due to property sales, better financial performance and a recovery in freight. Operating profit fell by 6.1% to SFr 288m, but consolidated net income was still up by 55% at SFr 381m.

Investment in rail infrastructure from SBB’s own funds amounted to SFr 123m, while public-sector funding rose by 7.7% to SFr 2.5bn due to higher maintenance and operating costs as well as the opening of the new Gotthard tunnel and the cross-city link in Zürich.

Passenger traffic earnings increased by 6.7% to SFr 139m. Meanwhile SBB Cargo returned to profit by making a small surplus of SFr 1m after a loss of SFr 22m in 2015, despite the challenging situation in the domestic and export freight markets. This was mainly due to growth at SBB Cargo International, improved productivity and reduced structural costs at SBB Cargo Switzerland.

Punctuality was the highest in five years at 88.8%. Opening of the Gotthard Base Tunnel has improved punctuality on the north-south axis, although there is still a need for improvement especially in cross-border traffic with Italy and with rolling stock reliability. The general improvement has been achieved despite more construction work on the network, as Meyer pointed out with some pride.

As for the future, SBB’s Railfit 20/30 cost reduction programme is working well and expansion projects in the Geneva area are well on the way with the Léman Express and Léman 2030 schemes.