UPDATE: Siemens-Alstom merger to be completed by end of 2018

SPEAKING at a joint Siemens-Alstom press conference in Paris on September 27, Mr Joe Kaeser, president and CEO of Siemens, confirmed that the merger of Siemens Mobility and Alstom should be completed at the end of 2018. Kaeser also said there will be redundancies. 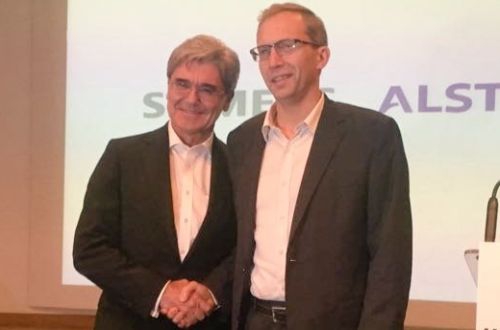 Kaeser confirmed that negotiations with anti-trust authorities regarding the merger will take some time. “We believe there is no fundamental risk, otherwise we wouldn’t be there,” he said. “This is a legal and regulatory process which we will work through diligently with the authorities in Brussels. It is very important that we make everything very transparent.”

Kaeser also said that the two companies have set up a balanced governance model. “We want continuity,” he said. “We will have a balanced approach to share the benefits, and carry the burdens of the transaction.”
When asked whether the merger will result in redundancies, Kaeser said: “Of course there will be. We will bundle our resources.”

Kaeser paid tribute to the current CEO of Siemens Mobility, Mr Jochen Eickholt, who is likely to be one of the first casualties of the merger, as Alstom’s chairman and CEO, Mr Henri Poupart-Lafarge, will head the new company. “Jochen Eickholt has brought Siemens Mobility from a meaningless to meaningful business,” Kaeser said.

Kaeser brushed aside questions regarding the recent talks between Siemens and Bombardier Transportation regarding a merger, and would not say why they had failed, but he did say that Siemens has been looking at possible mergers for a long time. “We have been examining what will be the best fit, and the outcome of that analysis is clearly Alstom,” he said.

This was confirmed by Poupart-Lafarge: “This is no do-or-die type of merger. There was no emergency. Alstom has been enjoying a great dynamism in a growing market. When we looked four years ago, Siemens was the best fit by far. So, when the opportunity arose, it was perfectly in line with our wishes. The transaction has been very fast because a lot of the groundwork has already been done.”

Poupart-Lafarge pointed to two clear trends in the rail market: globalisation and digitalisation. “Globalisation creates a lot of opportunities, but also a lot of opportunities for our competitors whether they be in China, Japan or elsewhere,” he explained. “The digitalisation of the market means we need to have strong technologies. We are two very innovative companies, but it requires a lot of investment and expertise.”

The merger is expected to strengthen the competitive position of Siemens and Alstom. “CRRC is extremely strong, and has changed the picture of the market a little,” Poupart-Lafarge said. “But what matters is customer proximity, innovation and the capacity to innovate - something where we are advanced compared with our competitors.”

Looking to the long term, Kaeser said the merger will allow the new company to harmonise technical development. “We can harmonise research and development and engineering,” he explained. “We need to bundle our services and get more out of them. It is about playing offense and not defence.”
Poupart-Lafarge said it is too early to look at whether specific product lines will be rationalised. “It is more a platform than a product concept,” said. “The goal is to take the benefits of both platforms to make the best train fit for the customer. Probably, in time, there will be global product platforms.”

“We are going into the fourth industrial revolution,” Kaeser said. “The merger will be a test of how we face the future. The merger will strengthen European technical leadership. We are creating a new European champion in rail with global reach. The Siemens-Alstom merger will be living proof that we can get things done in Europe.”

During an analysts call for major investors, held before the public press conference, Kaeser and Mr Ralf Thomas, Siemens Chief Financial Officer outlined the structure of the proposed deal.

Kaeser hailed the deal as a “transformational transaction for the global mobility industry,” adding that the new company created by the merger will help Siemens built a strong portfolio of businesses.

The deal encompasses all of Alstom, Siemens’ Mobility division (rolling stock and signalling) plus its rail traction drives business, which until now has been part of the Large Drives division. The transaction will take the form of a contribution-in-kind of the Siemens Mobility business plus the rail traction drives business to Alstom in return for newly-issued shares from the new Siemens-Alstom company.

Siemens’ will hold a 50.67% stake in the new entity when the deal is finalised at the end of 2018, giving Siemens managerial control. Kaeser had made it clear in his opening remarks that "Siemens will control and fully consolidate [the results of] the business. The remaining 49.33% of shares - effectively those now held by Alstom's existing shareholders - will continue to be listed on the Euronext stock exchange.

As part of the deal Siemens will receive warrants enabling the German group to increase its shareholding in the new company by 2% four years after the merger. Siemens has given undertakings to the French Government that this will not be done earlier.

In discussion of how the companies had arrived at the roughly 50:50 ownership split, Kaeser explained that the initial valuation based on financial results and order backlogs would have suggested Siemens would inject 62% of the value of the new company whilst Alstom represented 38%.

A series of financial changes and transactions are included in the deal to bring the Siemens contribution down to around 50%, although none of have any cash implication for Siemens. This means:

• Siemens will pay a premium for gaining control of Alstom - although this special dividend of around €4 per Alstom share (€900m) will be funded by Alstom from its cash reserves and “economically borne” by Siemens - reducing the Siemens contribution to the new company and thereby increasing the existing Alstom shareholders percentage of the future new company, and

• Alstom will execute “put options” concerning its energy-led joint ventures with GE and use some of the resulting €2.5bn to pay another special dividend of around €4 per Alstom share (€900m) to its current shareholders.

The proposed merger is subject to a wide range of regulatory approvals with formal consultation amongst Alstom's employees in France being the first major step. Due diligence carried out to expand upon the limited work already done by both companies while considering the merger. Antitrust approval will also be needed in multiple countries.

Siemens and Alstom have stated that the French government supports the transaction based on undertakings by Siemens, including certain governance and organisational and employment protections.

The French state has also confirmed that the Alstom shares it is currently loaning from majority Alstom shareholder Bouygues will be returned no later than October 17 2017 and that it will not exercise the options granted by Bouygues.

Bouygues has also committed to keep its shares until the earlier of the extraordinary general meeting deciding on the transaction and 31 July 2018. Siemens and Alstom say they anticipate final closing of the transaction and creation of the new company by December 2018 at latest.

If Alstom were to decide not pursue the transaction it would have to pay a €140m break-fee to Siemens.