RAIL will remain Spain's top transport priority in 2014 according to the Ministry of Public Works and Transport's draft budget published last week, accounting for 51% of the total planned investment of €8.98bn. Rail spending will increase by 21% from €3.78bn this year to €4.58bn in 2014. 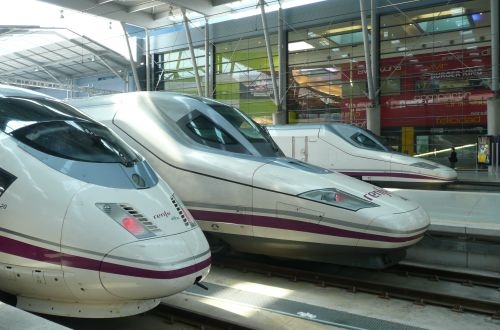 The bill, which requires parliamentary approval before the end of the year, will allow the government to invest €3.2bn in the high-speed rail network. With more than 1200km of new lines still under construction, the government has prioritised the completion of the route connecting Madrid to the Ourense - Santiago line. It will invest €1bn in this project and the Santiago - Vigo corridor.However, the high-speed budget is insufficient to bridge the widening gap between Spain's ambitious plans to extend the network simultaneously towards the 15 mainland regions, and the budgetary constraints imposed by the country's deepest economic crisis in decades.

Plans to convert the broad-gauge Barcelona – Valencia main line to dual gauge will receive a major boost once the bill is passed, with €306m allocated for the installation of a third rail to allow standard-gauge trains to use the line.

The Spanish government also outlined spending plans for Adif and Renfe. Total losses for Adif are expected to reach €297m, almost equal to those forecast for 2013, while debt will continue to spiral up from €15bn to €16.7bn in 2014, just ahead of German Rail's debt for 2012.

Adif holds about 25% of Spain's fibre-optic network, and expects to receive between €343m and €450m by renting its data infrastructure to private telecommunications carriers under 10 to 20-year contracts.

Renfe, which will be split up soon into four subsidiaries under a state-run holding company, is expected to lose €202m in 2014, up 10% from the loss forecast for this year, although its debt will be reduced by 8% to €5.7bn.