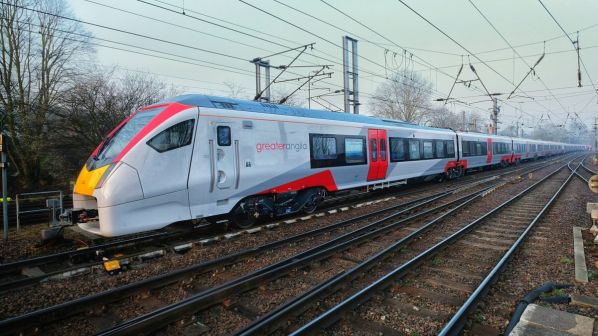 As a result, Stadler’s order backlog increased by 14% and now stands at a record SFr 15bn. Stadler also says it delivered 444 trains and locomotives in 2019, representing an 80% increase. The company says it achieved successful certification of new trains and punctual start-ups in several countries.

Net revenue rose by 60% to SFr 3.2bn. “However, due to project postponements, primarily Greater Anglia, revenue in the reporting period was lower than expected, which also weighed on the result,” Stadler says, referring to the British train operator. “The Greater Anglia order presents Stadler with specific challenges in several respects: first, the camera system of a British supplier, which had been taken into consideration at the request of the customer, did not meet expectations in terms of performance and stability. Secondly, the infrastructure in this region is partly dated, which led to disruptions during the introduction of the bi-mode Flirt vehicles. However, approval for the bi-modal (BMU) and EMU units was achieved in record time.”

Gross margin grew by 23% to SFr 356.2m, Ebitda increased by 30% to SFr 269.9m, and Ebit rose by 28% to SFr 193.7m. Stadler says its Ebit margin of 6.1% was lower than in 2018 and failed to meet expectations. Postponements and additional costs for individual orders had a significant impact, while the record order intake led to higher than expected sales expenses. In addition, exchange rate fluctuations, particularly between the Swiss franc and the Norwegian krone and Swedish krona, had a negative impact. Stadler ended 2019 with a profit of SFr 128.5m, an 8% improvement on its 2018 result.

The growth in production meant that Stadler had to expand its workforce by 23% to 10,900 employees in 2019, and more staff are being hired this year particularly in Germany, Spain and Belarus.

Stadler achieved notable successes outside Europe in 2019, with a €165m order for 34 diesel-electric locomotives from Taiwan  Railway Administration, a joint venture agreement with PT Inka, Indonesia, the opening of an assembly plant in Salt Lake City, United States, and a $US 600m contract from Metropolitan Atlanta Rapid Transit Authority (Marta) for 127 metro trains, with two options each for 25 trains. Stadler says the Marta deal is its largest metro train order.

Stadler’s maintenance business is growing rapidly. Stadler signed a contract with Vy, Norway, to maintain more than 100 trains. It will also maintain 41 new Rhein-Ruhr S-Bahn cars at a new facility in Herne, Germany, for 32 years, plus 52 new metro trains being supplied to Merseytravel in Liverpool, at a new depot in Liverpool-Kirkdale for 35 years.

The company has been expanding its signalling business at its Wallisellen facility since 2016 and achieved its first results in 2019. The Guardia ETCS train control system developed in cooperation with Mermec, Italy, within the Angelstar joint venture, received generic approval and will be installed on Flirt trains being supplied to BLS, the first of which will be completed this year. Stadler hopes to gain approval for Guardia in 10 countries by 2022. At the beginning of this year, Stadler Signalling was formed as a separate company.

Stadler predicts double-digit growth in 2020 but warns that additional costs to expand capacity will continue to affect profitability.