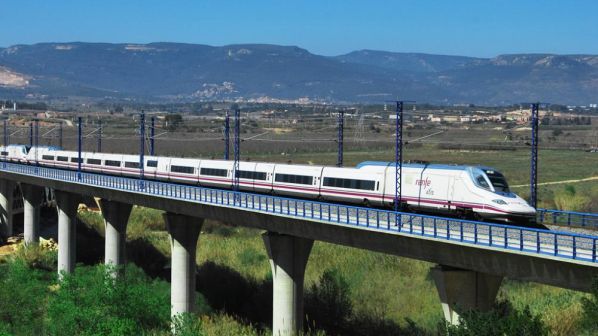 The higher turnover was driven by an increase in manufacturing activity, primarily high-speed trains for Renfe, and reflects a recovery in industrial activity during the second quarter.

Talgo was awarded a €134m contract by Danish State Railways (DSB) in February to supply eight sets of locomotive-hauled coaches as part of a framework agreement worth up to €500m, which the company says is a significant step towards consolidating its brand in European Union markets.

Talgo is currently working on commercial opportunities worth approximately €8bn, with an order book worth €3.3bn, including €1.2bn for manufacturing projects, guaranteeing revenues until 2024. The company has also bid for approximately €5.2bn in tenders as part of its strategy to ensure sustainable long-term growth. No significant contracts were cancelled as a result of the coronavirus pandemic.

Talgo expects that it will be able to execute all its projects successfully, with a strong capacity to finance new projects, with €291m of cash reserves available, and credit lines of up to an additional €145m.

As a result of this strong position, Talgo only recorded a decline of €9m in revenues during the second quarter, with lower revenues primarily due to operational disruption in the maintenance sector as a result of the Covid-19 pandemic.

Since mid-March, the company’s maintenance activity in Spain was reduced by 77%, resulting in a proportional ‘force majeur’ temporary lay-off of 313 workers. This will remain in effect until normal maintenance activities resume. However, Talgo states that this relies on the restoration of normal commercial rail operation, which is currently at 30% in Spain.

Despite increasing revenues significantly, Talgo recorded an adjusted Ebitda of €14.5m in the first half of the year, less than half of the €31m for the same period in 2019, reflecting the economic effect of the pandemic.

Operating profit declined until June due to lower productivity in manufacturing projects and the interruption of supply chains in the second quarter. Maintenance costs also did not fall proportionally to revenues, despite Talgo implementing significant cost reduction measures. However, Talgo highlights that the Ebitda result includes non-recurring expenses, primarily compensation and commissions for financial guarantees of projects, as well as an adjustment to IFRS 16.

Between March 30 to April 13, Talgo’s Spanish facilities were closed in accordance with mandatory government measures, causing significant disruption to its manufacturing sector. The sites subsequently reopened from April 14 with additional health and safety measures. Activities recovered to normal levels towards the end of the second quarter.

Disruption to Talgo’s supply chains caused by the pandemic also resulted in some delays to production.

In March and April, Talgo adopted contingency plans and cost saving measures to maintain its commitment to customers, preserve project operating margins and protect its workers, in compliance with the regulations of Spain’s Ministry of Health. This included the implementation of remote working, providing continuity for roles including project engineering, purchasing and commercial activities.

In addition, Talgo’s board of directors voted to reduce their salaries by 50% between March and December.

Talgo retracted its 2020 financial forecast in March, citing uncertainty about future economic activity. The company says that despite a more positive outlook for its revenues, it still expects a "significant level of uncertainty about business performance" during the second half of 2020, primarily in its maintenance sector, and will not provide new forecasts.