This was caused by the closure of the Chambeshi Bridge in Zambia and washouts in Tanzania. 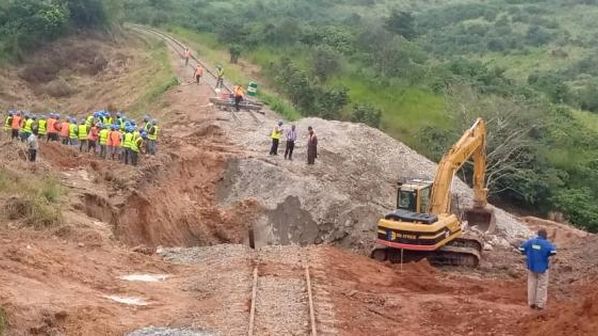 Washouts in Tanzania have affected revenue on the line.
Photo Credit: Tazara

REVENUE on the line connecting Tanzania and Zambia, which is overseen by the Tanzania-Zambia Railway Authority (Tazara), declined from $US 31m in the 2020-21 financial year to $US 24.2m in 2021-22, which ended on June 30.

This came as the closure of the Chambeshi Bridge in Zambia and washouts in Tanzania affected the annual freight performance, which dropped by 3.5% compared with the 2020-21 financial year.

The results were announced during a meeting of the Tazara board, which was attended by the permanent secretaries responsible for Transport in Tanzania and Zambia, Mr Gabriel Migire and Mr Fredrick Mwalusaka, who are the board’s chair and co-chair respectively. They were joined by Tanzanian board members, Professor Razack Lokina and Mrs Rukia Shamte, and Zambian board members, Mr Stephen Mbewe and Mr Nkumbu Siame, for the meeting in Dar es Salaam.

Passenger traffic also continued to be affected by the Covid-19 pandemic as well as the low availability of equipment.

The board approved the 2022-23 budget and expects the line to carry 450,000 tonnes of freight and 3.4 million passengers over this period. Revenue is projected to be $US 51.3m, a significant improvement, including $US 34.3m from passenger and freight services and $US 10.4m from non-traffic revenue, including open-access operation.

Ahead of the meeting, the board members toured the Port of Dar es Salaam, where they were also updated on the port’s operation and told of the potential freight flows along the Tazara route. During the meeting, the board encouraged the line’s management to expedite the repair of rolling stock and hire of locomotives to move the readily available volumes of freight. The board also encouraged Tazara to devise a short-term plan to purchase at least two locomotives a year.

The board noted the positive contribution of the private operators operating on the Tazara line through open-access agreements, but urged the line’s management to direct a portion of the revenue from open access fees towards the repair and upkeep of the line’s infrastructure.

The board also called for the line’s management to prioritise the digitisation of the financial and commercial systems as soon as possible.

Reviewing passenger fares, the board noted that while the cost of operating passenger trains had increased, both the Zambian and Tanzanian currencies had depreciated significantly since 2018 when the rates were last reviewed in Zambia, thereby creating fare distortions. The board approved a proposal to adjust the dollar-denominated base fares gradually by 6% in the first quarter and 6% in the second quarter of the 2022-23 financial year.

The board noted the directives from the heads of state of Tanzania and Zambia, who met in Dar es Salaam on August 2, and resolved to form a Joint Technical Committee that would harmonise the interests of the two governments and develop a position to find a suitable approach to revamping Tazara’s operation through the participation of other investors, including the Chinese.

This includes upgrading the 1067mm-gauge line to standard gauge to open up new business opportunities along the route.