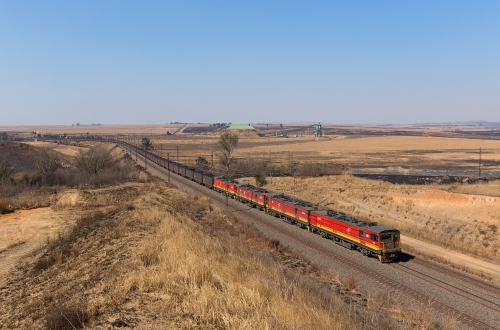 The increase in revenue was offset by a 1.3% decline in rail freight volumes to 212.4 million tonnes, as well as a 2.4% drop in port container traffic to 4.4 million TEUs.

Numerous cost-optimisation initiatives implemented throughout the company resulted in a Rand 4.7bn saving against planned costs. These initiatives included reducing overtime and professional and consulting fees, rolling out programmes to measure the execution of condition-based maintenance versus interval-based maintenance, and limiting discretionary costs relating to travel, printing, stationery and telecommunications.

Capital investment for 2019-20 increased by 3.5% to Rand 18.6bn, including Rand 3.6bn to expand network capacity and Rand 15bn to maintain existing capacity. Transnet Freight Rail and Transnet Engineering continued their build programme, manufacturing 400 wagons at a cost of Rand 528m.

Other infrastructure investments include:

Transnet increased its oversight of operational safety by increasing operational site-visits and safety awareness campaigns. Six employees and 109 members of the public were killed during Transnet operations during the year. These were largely attributed to level crossing accidents, and Transnet says it will continue to look for ways to minimise these incidents.

Transnet says it has performed below its potential in recent years, partially due to the lack of maintenance for ageing infrastructure and sluggish domestic and global economic growth, which has constrained its financial position.

The global economy is expected to remain subdued, with the impact of the Covid-19 pandemic resulting in slowing demand. Economic forecasts indicate that South Africa’s economy will shrink by between 8.2% and 11.5% in 2020, while the International Monetary Fund (IMF) forecasts that the global economy will shrink by at least 4.5% over the same period.

“Transnet faces significant challenges,” the company says. “However, with a new strategic outlook and a renewed emphasis on the wellbeing of people, safety, customer service, asset utilisation and cost control, the company is well positioned to become an agile and trustworthy freight transport and logistics partner to all our customers and stakeholders, and thereby contribute to the restoration of the South African economy.”